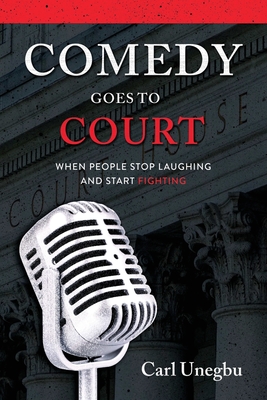 America is widely regarded as the most litigious society in the world. And comedians, just like everybody else, are not immune from the consequences of living in a place like America. Indeed, much the same goes for the other free societies across the world. For those outside the comedy industry, aka the general public, the book gives them an invaluable window into the exciting and sometimes fraught world of comedy and those who inhabit it. In short, you can call this book a "must read" for comedians and a "should read" for everybody else.

This is a book for anyone with an interest in comedy. For people in the comedy industry itself and indeed the broader entertainment industry, this book is literally a must-read. For those thinking about embarking on a career in comedy, not reading this book beforehand is probably something you can only do at your own peril. For all others (think the growing influence that comedy exerts on our contemporary pop culture) this book is a should-read. At the minimum the book offers useful guidance on how comedians should proceed in making a deal for their work; what a comedian can or cannot safely say or do, whether on stage or off stage; how to protect their comedy "material", which means their money; and how to safely manage their relations with their comedy industry colleagues as well as people in other industries or even just everyday folks out there. To properly drive home its point, the book draws lessons from the life and work of comedians not only here in the US, but also in Canada, Britain, Australia, Germany and more.

Long story short, this book helps comedians cover all their bases. Above all, this book has been years in the making and is the sort of book that could only have been written by somebody from a vantage position who not only knows the law around comedy but also has covered the world of comedy intimately and with good insight. In other words, someone like Yours Sincerely. Enjoy