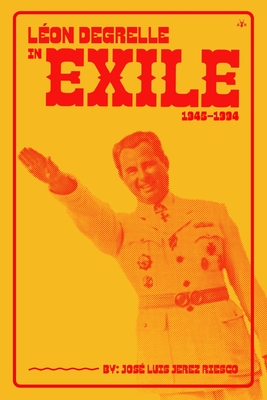 
Usually Ships in 1-5 Days
(This book cannot be returned.)
Crash landing in San Sabesti n, Spain in 1945, SS-Standartenf hrer L on Joseph Marie Ignace Degrelle (1906-1994) narrowly escaped death from his native Belgium and the Allied forces. Stripped of his Belgian citizenship and sentenced to death in absentia for his part in the German side of WWII, Degrelle lived the rest of his life in exile in Spain, harbored unofficially by Franco's government.

During these forty-nine years in exile, Degrelle never expressed any regret for his place in the war, nor did he remain silent as fantastic narratives were woven about the events of the war and the supposed atrocities of the Germans and their allies in the decades following. Despite attacks on his family, vilification by the whole world, and many conflicts with the Church, he never wavered in either his Catholic faith, or his conviction in National Socialism.

L on Degrelle in Exile (1945-1994) presents the story of these forty-nine years, complete with extensive letters between Degrelle and his friends and family, interviews, speeches, and anecdotes from those who knew and loved him. Degrelle was one of the few remaining from the Axis side to share his account of the war and his commentary on the world as it changed drastically after their defeat in 1945.

Antelope Hill Publishing is proud to present Jos Lu's Jerez Riesco's L on Degrelle in Exile (1945-1994) translated into English for the important task of preserving this great man's legacy.﻿