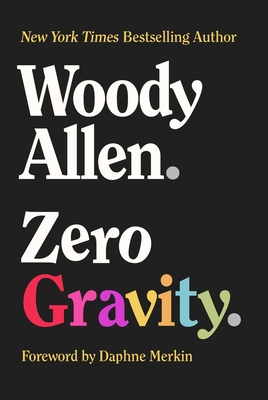 Zero Gravity is the fifth collection of comic pieces by Woody Allen, a hilarious prose stylist whose enduring appeal readers have savored since his classics Getting Even, Without Feathers, Side Effects, and Mere Anarchy. This new work combines pieces that have appeared in The New Yorker along with eleven written exclusively for this book, each a comic inspiration. Whether he’s writing about horses that paint, cars that think, the sex lives of celebrities, or how General Tso’s Chicken got its name, he is always totally original, broad yet sophisticated, acutely observant, and most important, relentlessly funny. Along with titles like “Buffalo Wings, Woncha Come Out Tonight” and “When Your Hood Ornament Is Nietzsche,”  included in this collection is his poignant but very funny short story,  "Growing Up in Manhattan.” Daphne Merkin has written the foreword.

Zero Gravity implies writing not to be taken seriously, but, as with any true humor, not all the laughs are weightless.
Woody Allen is a writer, director, and actor. He has been a stand-up comedian and a published author. He lives on the Upper East Side of Manhattan with his wife of twenty-four years, Soon-Yi, and their two daughters, Manzie and Bechet. He is an avid jazz enthusiast and devoted sports fan. In his own words, he regrets that he has never made a great film, though he says he is still trying.

Daphne Merkin is a novelist and critic who has made a name for herself with her often unnerving candor and forthright attitude toward issues of family, religion, money, and sex as well as her ability to straddle the high/low cultural divide. She has been a staff writer for The New Yorker and a contributing writer for the New York Times Magazine, T Magazine, Elle, and Tablet. She has written frequently for other publications, including the New York Times Book Review, Times Literary Supplement, New York Review of Books, Wall Street Journal, Bookforum, Travel & Leisure, and Departures. Merkin has also published five books, which include two novels, a memoir of depression, and two collections of essays. She is a longtime fan of Woody Allen.
Praise for Mere Anarchy, Woody Allen's previous collection of his short humor pieces:

“The stories in Mere Anarchy deliver the same joys and foibles that have been with its author from the start.”—Janet Maslin, The New York Times

“Uproarious . . . In each story the ornate and the vulgate slam together and make it rain polysyllabic absurdity.”—Wall Street Journal

“Like the Carnegie’s one-pound sandwiches, Allen’s literary slapstick is . . . comedy on wry.”—USA Today

“Will put a rictus on your kisser. . . . The animating comedy is part S. J. Perelman and part borscht belt: Allen piles the ludicrous on top of the ridiculous and tops it with an acidic lemon squeeze, and then just keeps the jokes coming.”—Publishers Weekly

"The topsy-turvy literary allusions pour from Allen's pen like bullets from a Gatling gun (an appropriately obscure simile), exposing the intellectual pretensions of a ragtag assortment of Allenesque everymen—endearingly unkempt nebbishes who, despite knowing their Dostoevsky, can't quite deal with the absurdities of daily life."—Booklist