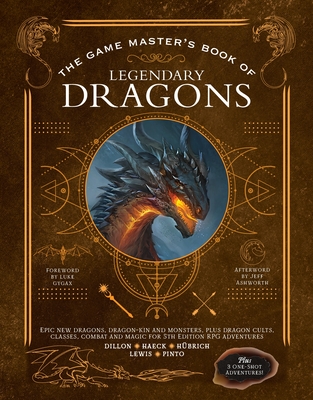 Experience the wonder and terror of dragons as they were meant to be!

Game Masters and players alike are familiar with dragons and the threat they present in the world’s most popular tabletop roleplaying game. They’ve become so well-known, however, that some might say the magic has worn off them a bit. Even with the benefit of high-profile gaming supplements, they've become generic monsters, making the dragons in “Dungeons & Dragons” a shadow of their former imposing selves.

In The Game Master’s Book of Legendary Dragons, readers will find more than two dozen truly epic beasts, each of which comes with a complete backstory, a history, motivations, lair actions, legendary combat actions and more. These creatures are designed to be a worthy focus to any campaign, whether as a mind-blowing BBEG for an unforgettable, high-level climax, or as a motivating force that runs in the background of a lower level adventure.

The Game Master's Book of Legendary Dragons will provide endless ideas for Game Masters and countless hours of epic-level fun for adventurers willing to test their mettle against the baddest beasts the game has to offer.

Aaron Hubrich is the CEO and Senior Editor of Conceptopolis, LLC., an award-winning art studio that provides creative services to many well-known companies such as Hasbro, Wizards of the Coast, Square Enix, Mattel, Sony, DC, Marvel and many more.

James J. Haeck is the lead writer at D&D Beyond, and co-author of Waterdeep: Dragon Heist (Wizards of the Coast) and Critical Role Tal-Dorei Campaign Setting (Darrington Press)

Dan Dillon is the author of Tome of Beasts and Creature Codex (both from Kobold Press) and is a designer at Wizards of the Coast.

Cody Lewis is a YouTube creator and D&D Twitch streamer. He is also the mad mind behind Save or Dice.

Jim Pinto is the author of Legend of the Five Rings, Warlord, Protocol, Praxis, The Carcass, George's Children and The World's Largest Dungeon, as well as Gods and Goddesses and Masters and Minions from Jetpack7.

Luke Gygax is a writer, filmmaker and son of Dungeons & Dragons creator Gary Gygax. He is the founder of Gary Con, as well as the Head of Wizards of the Coast's Founders and Legends.

"A great companion to the previous books in the series."
-- MuggleNet

"Packed with information and ideas that will bring dragons to the forefront of your favorite fantasy role-playing game."
-- Luke Gygax, founder of Gary.com

"A host of horrific and awe-inspiring dragons...realized with breathtaking artwork. All the tools you'll need to build months of material for your party to dive into."
-- Jeff Ashworth, author of The Game Master's Book of Traps, Puzzles and Dungeons