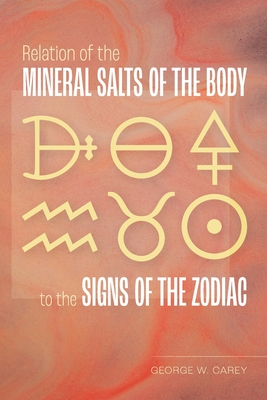 Dr. George Washington Carey's 1932 work Relation of the Mineral Salts of the Body to the Signs of the Zodiac unites homeopathy and astrology to explain both the causes and cures of human disease. Dr. Carey's unique blend of chemistry, physiology, religion, and astrology has made him a popular writer in homeopathic circles since the early 20th century.

Dr. Carey's work was greatly influenced by the experiments of another contemporary doctor, Wilhelm Heinrich Sch ler. Dr. Sch ler was the first to identify the twelve "cell-salts," which Dr. Carey expounds on further in Relation of Mineral Salts.

Dr. Carey is perhaps best known for his "Chemistry of Life" publications, released in the 1910s. These works are still popular in New Age circles. In The Chemistry of Human Life (1919), Dr. Carey originated the idea that the human body is a "chemical formula in operation," and without each chemical in the correct amount, the formula will no longer create the desired effect - a healthy and vibrant person.

Relation of the Mineral Salts of the Body to the Signs of the Zodiac expands on this idea and ties these chemical needs to the Zodiac. Published posthumously in 1932, this work was co-written with Inez E. Perry. Dr. Carey collaborated with Ms. Perry several times before his death in 1924.

Relation is Dr. Carey's contribution to a larger two-part work titled The Zodiac and the Salts of Salvation. In this short volume, Dr. Carey explains that all maladies are due to a deficiency in some necessary chemical, or "cell-salt." Just as the "cure" for a shadow is to introduce light, the cure for maladies of the human body is to introduce some vital element for the nourishing of our blood and organs.

But which cell-salts are we deficient in? That may well depend on the position of the sun at our birth - or our Zodiac signs. Dr. Carey describes the 12 signs of the Zodiac, including their characteristics and the cell-salts that he recommends to cure the diseases of each.

For example, those born between June 21st and July 22nd under the sign of Cancer exhibit "tenacity...in holding onto home or dwelling place." This is represented by the crab, who has both a tight grip and "carries its house along wherever it goes in order that it may be sure of a dwelling."

Dr. Carey identifies the salt fluoride of lime (or calcium fluoride) as the most important salt for the Cancer. When it is deficient, tissue fiber loses its elasticity. Symptoms of this relaxation can include varicose veins and interestingly, "a groundless fear of financial ruin."

There are Biblical connections explored as well. Dr. Carey associates both the twelve apostles and the twelve sons of Jacob and their respective tribes to an astrological sign. Jacob's tenth Zebulum, or Zebulun in many modern translations, represents Cancer. His name even translates to "dwelling" in Hebrew.

Dr. Carey was not the first to make the connection between the twelve sons of Jacob, twelve apostles of Christ, and the Zodiac. In fact, Rev. Robert Taylor may have been the first to make this connection in the mid-19th century in a series of controversial sermons. His ideas were so contentious that he was banned from preaching in the United Kingdom.

The second part of the work, written by frequent collaborator Inez E. Perry, is titled Esoteric Analysis and Synthesis of the Zodiacal Signs and their Physiochemical Allocations. This volume expands on Relation of Mineral Salts and provides guidance for the use of each mineral to cure disease and reach a more enlightened spiritual state.