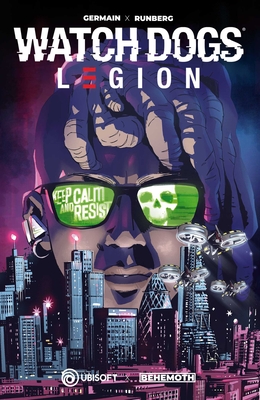 
Usually Ships in 1-5 Days
The ultra popular action-adventure video game from Ubisoft gets a graphic novel adaptation! This original story will weave a plot mixing anticipation and action in the heart of a terrifying (and yet so believable) London.

London Calling! Mass surveillance, private militias bringing order to the streets, organized crime... the city of London has become a symbol of widespread oppression, and only its people can free it. A resistance movement bringing together genius hackers and insurgents ready for combat, DedSec stands up to free the city from the yoke of these profiteers. While investigating mysterious disappearances in Kennington Oval Camp, journalist Louise Hartford will cross paths with Adam Logan, known as "Spiral", a London DJ whose music has become a symbol of revolt. Together, and with other companions in misfortune, they will have to infiltrate the spheres of power to unravel the truth.
Sylvain Runberg, born in 1971, divides his time between Stockholm, Provence, and Paris. He has a diploma in Plastic Arts and an MA in Political History. Before he started writing, Runberg worked for publishing house Humanoides Associés, as the editor for Moebius & Enki Bilal, among others. His first book was launched in 2004 and since then Runberg has had more than 50 books published by the largest French publishers (Glénat, Le Lombard, Dupuis, Dargaud, Casterman, Soleil, Futuropolis) and is now translated into 15 languages, having sold in total over 1 million copies worldwide. Very quickly recognized as one of the most talented writers of his generation, Sylvain Runberg is characterized by the variety of the worlds that he creates: space opera (Orbital, Warship Jolly Roger), speculative fiction (Drones [Le Lombard/Europe Comics]), psychological thrillers (Cases Blanches, Face Cachée, of which the first volume was awarded the Silver Prize of the 4th International Manga Awards in Tokyo), horror (Sonar), historical adventures tinged with fantasy (Darwin’s Diaries [Le Lombard/Cinebook], Conquests [Le Lombard/Europe Comics], Hammerfall), dark fantasy, crime stories (Motorcity [Dargaud/Europe Comics], Interpol: Stockholm [Dupuis/Europe Comics]), and political thrillers, all characterized by his realistic style. Runberg has also adapted the Stieg Larsson trilogy Millennium (The Girl With The Dragon Tattoo [Titan Comics]) with illustrators Homs and Man. Sylvain Runberg is currently working on several new comics projects that will be published in the years to come in Europe and the US (he has always claimed that the US comics scene was a great source of inspiration for him). His most recent work includes the historical fantasy saga Jakob Kayne (Le Lombard/Europe Comics), created alongside Mateo Guerrero.