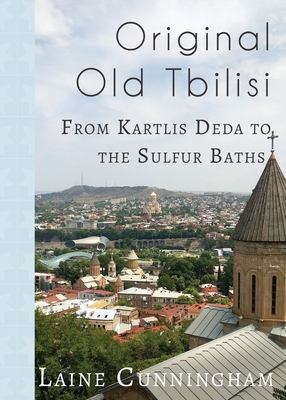 This is book number 35 in the Travel Photo Art series.

Originally an administrative district, Old Tbilisi is a distinct area of the Republic of Georgia's largest city. At its heart, the Tbilisi Historic District straddles the Kura River. On the left bank are the Alexanderdorf German quarter, and the Avlabari Armenian and Georgian neighborhood. On the right stands the Persian Quarter known as Said-Abad.

The iconic wooden buildings with ornate balconies sit in the shadow of the ancient Narikala fortress. Dating from the 4th century, Shuris-tsikhe was originally called the Invidious Fort. Much later it became Narin Qala, Little Fortress. Much of what visitors see today dates from the 16th and 17th centuries.

Looking down on the original Old Tbilisi is Kartlis Deda. The monument atop Sololaki is sixty feet high. The aluminum figure wears the traditional Georgian national dress for women. She greets visitors who mean well with a bowl of wine in her left hand. In her right is a sword with which she greets those who mean Georgia harm.

Lower down, bathhouses utilize the sulfur spring. The water flows in an open canal through the middle of the Abanotubani, or bath, district. The round domes mark the Turkish baths. These ancient structures are still in operation and are open for public use.

Explore this astonishing maze with Original Old Tbilisi: From Kartlis Deda to the Sulfur Baths (a Travel Photo Art book).

In the Travel Photo Art series, traditional tourism panoramas mix with arthouse aesthetics. These slim, passport sized productions are your passport to new perspectives on famous places. Peer around corners and discover a unique way to interact with monuments and memorials you thought you knew.

This popular series includes titles that mix text with the pictures. Books like Notre Dame Cathedral: Our Lady of Paris, featuring photos taken months before the 2019 fire, become keepsakes associated with a specific site. Titles like Lidice Lives and Terezin and Theresienstadt are deeply meaningful for families touched by the Holocaust.

Laine Cunningham, a three-time recipient of The Hackney Award, writes fiction that takes readers around the world. Her debut novel, The Family Made of Dust, is set in the Australian Outback, while Reparation is a novel of the American Great Plains. She is the editor of Sunspot Literary Journal.