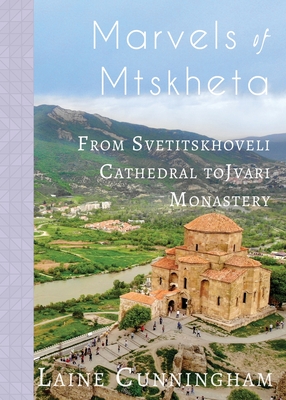 This is book number 32 in the Travel Photo Art series.

Mtskheta is one of the oldest cities in Georgia and its former capital. Lodged only twenty kilometers north of Tbilisi, it stands at the confluence of the Mtkvari and Aragvi rivers. The importance of its service to Christianity led it to be dubbed the Holy City.

Visitors can access a variety of historical monuments in the area. The complex at Samtavro Monastery includes Samtavro Transfiguration Church and the Nunnery of St. Nino. These examples of Early and High Medieval architecture date from the 4th century, when they were built, and the 11th century, when they were rebuilt. Nuns tend the graves, including the resting place of a sanctified Georgian monk named Gabriel.

Jvari Monastery, meanwhile, dates from 545. More than a hundred years earlier, a female evangelist called Saint Nino set up a large cross made of woody vines. The church built on the site hovers near a cliff with views over the rivers and the valley.

In Mtskheta itself stands Svetitskhoveli Cathedral. Known as the burial site of Christ's mantle, the building is a masterwork of Early and High Middle Ages design. The cross-in-square structure of Georgia's second-largest church was completed in the early 11th century.

Escape into the Caucasus with Marvels of Mtskheta: From Svetitskhoveli Cathedral to Jvari Monastery (a Travel Photo Art book).

In the Travel Photo Art series, traditional tourism panoramas mix with arthouse aesthetics. These slim, passport sized productions are your passport to new perspectives on famous places. Peer around corners and discover a unique way to interact with monuments and memorials you thought you knew.

This popular series includes titles that mix text with the pictures. Books like Notre Dame Cathedral: Our Lady of Paris, featuring photos taken months before the 2019 fire, become keepsakes associated with a specific site. Titles like Lidice Lives and Terezin and Theresienstadt are deeply meaningful for families touched by the Holocaust.

Laine Cunningham, a three-time recipient of The Hackney Award, writes fiction that takes readers around the world. Her debut novel, The Family Made of Dust, is set in the Australian Outback, while Reparation is a novel of the American Great Plains. She is the editor of Sunspot Literary Journal.