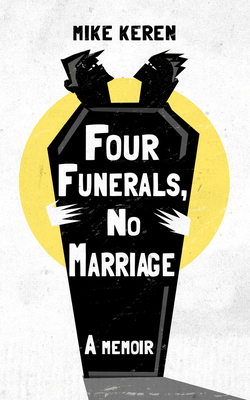 "A heartbreaking memoir that is also highly relatable and often darkly funny."


- Michael Sadowski, Author of Men I’ve Never Been: A Memoir, one of Book Authority’s 100 Best Gay and Lesbian Books of All Time

In Four Funerals, No Marriage: A Memoir, author Mike Keren gives his readers an inside look at his unexpected foray into caregiving to his sick and dying parents and in-laws. Often funny and always poignant, the story begins when his loving but difficult parents announce they are moving back to New Jersey from their retirement home in North Carolina because they “never really liked it there.” Within days of arriving on a house-hunting trip, his father is hospitalized with a stroke and his mother with another in a series of heart attacks. At the same time, his partner’s mother is recuperating from a hysterectomy and struggling with chemotherapy after a diagnosis of uterine cancer. Additionally, he must deal with the unhappy marriage between his parents, sibling relationships that have often been his undoing, a homophobic world, and his own lifetime of affective dysregulation.

Trained as a psychologist and psychoanalyst, Mike Keren first learned care giving while helping to raise his younger brother, but really flourished as he “came out” into the AIDS pandemic. He has authored and coauthored numerous articles for publication. He is supported in his endeavors by his loving husband, Tom, and their two canine children, Carley and Clyde. They divide their time between central New Jersey and the mountains of northeast Pennsylvania.
“A heartbreaking memoir that is also highly relatable and often darkly funny. If you’ve ever cared for aging, ailing parents and worried that you might not survive the experience yourself, this book is for you.” —Michael Sadowski, author of Men I’ve Never Been: A Memoir, one of Book Authority’s 100 Best Gay and Lesbian Books of All Time

"its portrayal of the love and care that he gave his parents shines through and provides occasions for his most poignant prose... An often affecting account of end-of-life care." —
Kirkus Review