The Cloud Roads: Volume One of the Books of the Raksura (Mass Market) 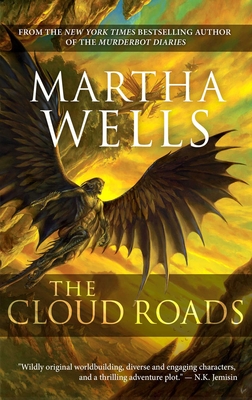 The Cloud Roads: Volume One of the Books of the Raksura (Mass Market)


Usually Ships in 1-5 Days
Now available in mass market paperback, The Cloud Roads is the first in the Hugo Award-nominated Books of the Raksura series, from New York Times bestselling author Martha Wells (The Murderbot Diaries).

Moon has spent his life hiding what he is: a shape-shifter able to transform himself into a winged creature of flight.

An orphan with only vague memories of his own kind, Moon tries to fit in among the tribes of his river valley, with mixed success. Just as he is once again cast out by his adopted tribe, he discovers a shape-shifter like himself—someone who seems to know exactly what he is, who promises that Moon will be welcomed into the shape-shifter community.

What this stranger doesn't tell Moon is that his presence will tip the balance of power, that his extraordinary lineage is crucial to the colony's survival, and that his people face extinction at the hands of the dreaded Fell! Now Moon must overcome a lifetime of conditioning in order to save himself . . . and his newfound kin.
Martha Wells is the author of more than a dozen science fiction and fantasy novels, including the Ile-Rien series (The Death of the Necromancer), the Murderbot Diaries series (All Systems Red), and the Books of the Raksura (The Cloud Roads). Her work has won the Nebula, Hugo, and LocusAwards, been nominated for the Compton Crook award, and been published in eight languages. Wells lives in College Station, Texas.