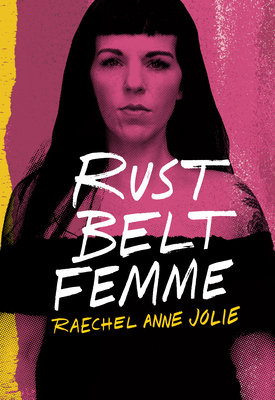 One of NPR's "Best Books of 2020," and winner of the 2020 Independent Publisher Awards' gold medal for LGBTQ+ nonfiction, Raechel Anne Jolie's blazing memoir is now available in paperback.

Raechel Anne Jolie's early life in a working-class Cleveland exurb was full of race cars, Budweiser-drinking men, and the women who loved them. When she was four, though, her life changed forever when her father was hit by a drunk driver and suffered a debilitating brain injury.

Rust Belt Femme is the chronicle of her survival. Fearlessly honest, wry, and tender, Jolie digs into both the pain of past traumas and the joy of teenaged discovery to craft a love letter to the brassy, big-haired women who raised her and the 90s alternative, riot grrrl culture that shaped her into who she is today: a queer femme with PTSD and a deep love of the Midwest.

Personal and political, lyrical and fierce, Rust Belt Femme speaks to anyone who was once a misfit kid trying to find their place in the world.

Raechel Anne Jolie is a writer, educator, and media maker. Raechel received her PhD in Communication Studies with a minor in Gender & Sexuality Studies from the University of Minnesota. Her writing has been published in numerous academic journals as well as various popular press sites (Teen Vogue, Bitch Magazine, In These Times, and more). You can find her @reblgrrlraechel or at www.raechelannejolie.com. She lives in Cleveland