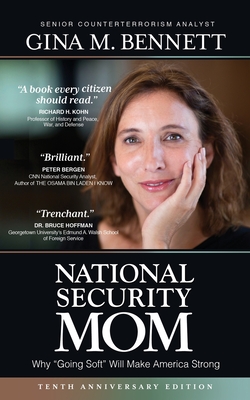 NATIONAL SECURITY MOM offers the basics of current terrorism trends and national security policymaking from a parent's perspective. Written by a mother of five and 20-year veteran of counterterrorism in the US Intelligence Community, this book de-mystifies the underworld of terrorism and offers a unique comparison of how the super-secret intelligence approach to securing our nation is surprisingly similar to how parents secure their homes and families.

By comparing the expertise parents gain while running their households to the skills required to govern, NATIONAL SECURITY MOM empowers America's parents to engage with confidence in the public national security debate. The simple premise, that everything we need to know about securing our nation we have learned from our family life, offers hope that no matter what security challenges America faces, our nation will be proud and secure.

We need only follow the guidance we give our children, such as "clean up your own mess," "tell the truth," and "don't give in to a bully," to ensure our nation's welfare. Moms know that the most important lessons they teach their children will last a lifetime. Who better to entrust the security of our nation than mothers?