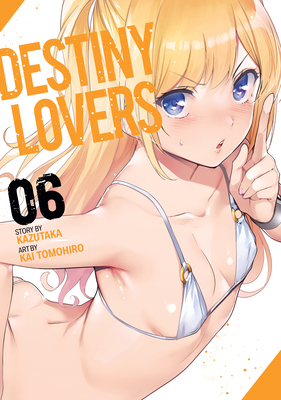 This is book number 6 in the Destiny Lovers series.

A BATTLE BETWEEN THE SEXES...TO THE DEATH! Fujishiro Kosuke has been abducted, confined to prison, and ruthlessly pursued by a gang of wardens determined to steal his virginity. Now, after finally escaping the jail, he and the other virgins find themselves stranded on a lush tropical island! The beautiful, bikini-clad girls who call this island home have a grudge against men, but the wardens give the prisoners two choices: give in to temptation or die!
Kazutaka is a Japanese writer best known for Destiny Lovers. Kai Tomohiro is a Japanese manga creator best known for adult work, including the art of the manga series Destiny Lovers.