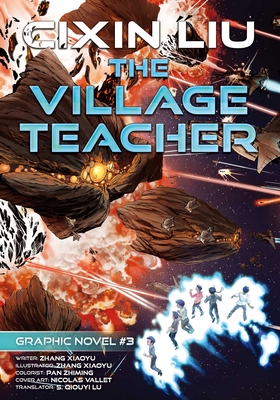 In the depths of mountains shrouded with ignorance and superstition, a man dedicates his life to igniting a passion for science and culture in children’s hearts. As his life draws to an end, he uses his dying breaths to impart knowledge on others. Fifty thousand lightyears away, in the depths of outer space, an interstellar war that has lasted for twenty thousand years draws to an end. In order to preserve the Milky Way’s many civilizations, the victor begins to exterminate lower-level life forms. When they reach Earth, they pose a test. The eighteen children deep in the mountains use the last lesson their teacher taught them to shine bright the hope of civilization…

The third of sixteen new graphic novels from Liu Cixin and Talos Press, The Village Teacher is an epic tale that all science fiction fans will enjoy.
Cixin Liu is the most prolific and popular science fiction writer in China, as well as a senior engineer. For his grand narratives and superb imagination, Liu is recognized as a leading voice in Chinese science fiction. He is a multi-award winner with Hugo, Locus, Ignotus, Kurd-Laßwitz-Preis, and Seiun Awards, as well as many others. He is also a nominee for the Nebula Award. In 2018, he received Arthur C. Clarke Award for Imagination in Service to Society. He is also a nine-time winner of the China Galaxy Award, and in 2015 earned the Xingyun Lifetime Achievement Award.

Zhang Xiaoyu was born in 1975 in Guizhou, China, graduated from the Guizhou Art Institute in 1997, and has been working as a graphic novel artist ever since. He is among the few artists creating Chinese graphic novels who has had international influence. From 1997 to 2005, he worked for the magazine Science Fiction World as editor, then head art supervisor, and finally chief editor. In 2005 he joined Beijing Total Vision Culture Spreads Co., Ltd. as a full-time graphic novel artist. In 2001, his work Fly won first prize in the 3rd China Animation and Comic Competition. In 2005, his work Saving Mankind won top prize for Best Script at the 5th CACC. In 2008, his work Clown won best graphic novel at the seventh competition. In 2014, he won the Prix du Public France 3 at the 38th Festival International de la Bande Dessinée de Chambéry, as well as a Golden Monkey King Award in comics at the 10th CICAF. As an outstanding member of China's graphic arts community, Zhang Xiaoyu's twenty years of artistic creation have helped revitalize original graphic art in China and served as a great contribution to the international expression and global dissemination of Chinese culture.