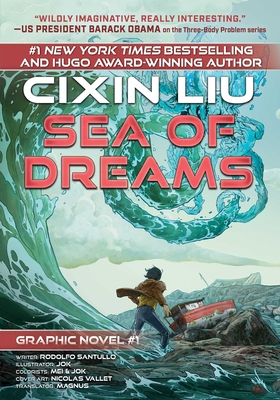 An annual ice sculpture festival draws the attention of an extraterrestrial visitor, who learns how to create such art and decides to use local resources to sculpt a piece in a gesture of goodwill. All the water in the ocean is sent to the stratosphere, where the ice sculptor uses splendid techniques to create crystal dominoes scattered by a giant of the cosmos. In the world of the ice sculptor, art is the sole reason for civilization’s existence. After the ice sculptor creates the pinnacle of beauty, but also brings forth devastation and disaster, humanity decides during Earth’s last breaths to fight for their survival.

The first of sixteen new graphic novels from Liu Cixin and Talos Press, Sea of Dreams is an epic tale of the future that all science fiction fans will enjoy.
Cixin Liu is the most prolific and popular science fiction writer in China, as well as a senior engineer. For his grand narratives and superb imagination, Liu is recognized as a leading voice in Chinese science fiction. He is a multi-award winner with Hugo, Locus, Ignotus, Kurd-Laßwitz-Preis, and Seiun Awards, as well as many others. He is also a nominee for the Nebula Award. In 2018, he received Arthur C. Clarke Award for Imagination in Service to Society. He is also a nine-time winner of the China Galaxy Award, and in 2015 earned the Xingyun Lifetime Achievement Award.


Rodolfo Santullo is a Mexican-born Uruguayan writer, journalist, comic book writer, and editor. He was awarded the Solano López Prize for Best Script for his graphic novel "Cena con Amigos". In 2008 he was awarded a grant by the Ministry of Education and Culture of Montevideo, in the Graphic Story category. In 2009 he shared the First Prize in the JC Onetti Contest with the comic book artist Matías Bergara.


Jok was born in Buenos Aires, Argentina in the seventies and has been working as a writer and artist since 1993. His work has been published in USA, England, Italy, France, Spain, Cypruss, Canada, China, Brazil, Argentina and Uruguay, and in 2016 he was distinguished as a guest in the World Artists Illustrate Beijing Festival, along with top-notch artists from all over Europe. He has run a studio along with his comrades-in-arms since 2001, splitting his time amongst several endeavors, including work-for-hire projects, creator-owned books, children's illustration, and color work, as well as  attending conventions all over the world, doing some writing, and never missing a match of his weekly soccer with friends and colleagues.