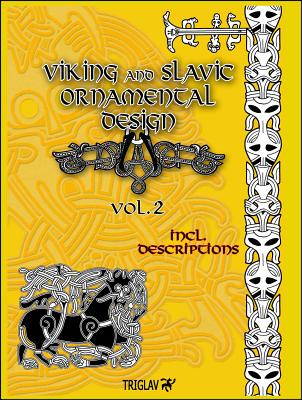 
Usually Ships in 1-5 Days
"Viking and Slavic Ornamental Design" volume 2, increases the demand for the graphic collection. Historic re-enactors and enthusiasts of the Viking Age in many countries. This volume presents 258 new, yet old designs.

"Viking and Slavic Ornamental Design" volume 2, increases the demand for the graphic collection. Historic re-enactors and enthusiasts of the Viking Age in many countries. This volume presents 258 new, yet old designs.

Selection of patterns is similar to the first edition, but vol. 2. contains two thematic groups. The Boss and Bamberg reliquaries, which are justly considered masterpieces. This focuses on the Slavic and Northern-Germanic mythology of the Viking Age.
Igor Gorewicz was born in 1976 in Szczecin, Poland. In 2000 he graduated from the Institute of Political and Social Sciences of the University of Szczecin.

Since 1999, he has published dozens of popular science, scientific and journalistic articles in the history and archeology of the Slavs, military history, historical reconstruction, Slavic mythology, history of ideas, religious studies, culture and politics (including Focus, From the Abyss of the Ages, Mare Integrans , Archeologia Zywa, Gazeta Rycerska, Pro Memoria, Zachodniopomorski Wanderer, State and Society and others).

Founder (1998) and leader of the Gródu Trzyglowa Team - an association dealing with the reconstruction and popularization of the Slav culture - which cooperates with scientific and museum centers in the field of historical reconstructions, exhibition preparation, organization and running of historical festivals. In this capacity, he presented the culture of the Slavs throughout Poland and on many occasions in Denmark, Germany, the Netherlands, Sweden, Norway, England, Estonia, the USA, India, Italy, Iceland and Lithuania. He is likewise the founder and artistic director of historical festivals.

In addition, he is a publisher, producer, musician, film and theater consultant, fight director (he took part in almost twenty film productions). Author of educational exhibitions, including the "World of Slavs and Vikings" and "Swords of Europe" shown by museums throughout the country.

He is the author of the following books:

Ornamentation of the early Middle Ages, with the addition of the Rus. Szczecin 2009

Viking and Slavic Ornamental Design vol. I, Szczecin 2009 and subsequent editions of

Borek and the Slavonic Gods, Szczecin 2014