In Defense of Ska (Paperback) 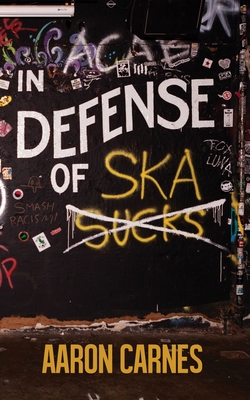 In Defense of Ska (Paperback)

Why doesn't ska get its due as a rich, diverse genre the way punk, metal, hip-hop and electronic music does? Or more to the point, why are ska fans so embarrassed of this music they love? The era of ska shame is officially over. In Defense of Ska is the much-needed response to years of ska-mockery. No longer do ska fans need to hide in the basement, skanking alone in their sharp suits, slim ties and porkpie hats. Now the time to take to the streets and fight music snobbery, or at least crank up the ska without being teased ruthlessly.

In a mix of interviews, essays, personal stories, historical snapshots, obscure anecdotes, and think pieces, In Defense of Ska dissects, analyzes and celebrates ska in exactly the way fans have been craving for decades. This book will enlist ska-lovers as soldiers in the ska army, and challenge ska-haters' prejudices to the core.

Aaron Carnes is a music journalist based out of Sacramento, California. His work has appeared in Playboy, Salon, Bandcamp Daily, Sierra Club, Noisey, Sun Magazine, and he's the music editor at Good Times Santa Cruz weekly newspaper, where he tries to sneak in ska content whenever his boss isn't looking. Aaron has been listening to ska since the early '90s. He used to play drums in a ska band. Now he just plays ska on his car stereo. When he's not defending ska, he enjoys backpacking with his wife Amy Bee, and talking about music from every existing genre. Ska will always be his favorite.