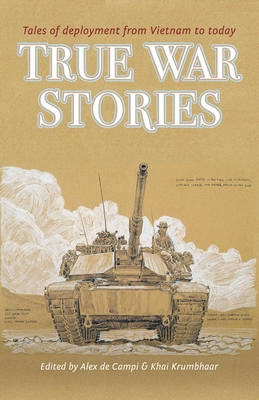 A sniper in Haiti faces the repercussions of the shot he never took. A team of SEALs help rescue a kidnapped girl in the Philippines. Army interpreters in Iraq battle their toughest foe: the rats of Saddam’s palace. A soldier on a late-night run surprises a motorpool saboteur. A young cavalry lieutenant, fresh off the Battle of Kamdesh, meets the Marine half-brother he’s never known. A Navy ship reacts to an unexpected man overboard. And if you’ve ever wondered what Christmas was like in a war zone, you’re about to find out.

True War Stories is a 260-page full color graphic novel anthology containing fifteen true tales of American service members overseas. Nearly every branch of the military is represented in this collection of stories that are heartwarming, heroic, harrowing, and even at times, hilarious, spanning the globe. This unique project, assembled by the multiple-Eisner nominated writer/editor, Alex de Campi and co-written/edited by Iraq War veteran Khai Krumbhaar is an entertaining and moving work of graphic nonfiction, pairing members of the US military with the biggest names in comics to share real war stories told by those who lived them.