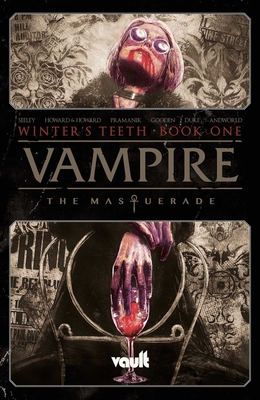 
Usually Ships in 1-5 Days
The global best-seller Vampire: The Masquerade comes to comics. When Camarilla enforcer Cecily Bain takes a fledgling vampire under her wing, she's dragged into an vast conspiracy that will topple princes and threaten the very Masquerade.

BORN FROM THE WORLD OF THE INTERNATIONALLY BEST-SELLING ROLE PLAYING GAME, VAMPIRE: THE MASQUERADE'S CRITICALLY ACCLAIMED COMICS DEBUT SPINS A GRIPPING AND TRAGIC TALE ABOUT THE BEAST WITHIN US ALL.

When Cecily Bain, an enforcer for the Twin Cities' vampiric elite, takes a mysterious new vampire under her wing, she's dragged into an insidious conspiracy. Meanwhile, on the outskirts of the cities, a rebellious found-family of vampire cast-outs investigates a vicious killing.

As the unlives of the Kindred twine together and betrayals are unearthed, will Cecily be able to escape and save what's left of her family, or will she be yet another pawn sacrificed to maintain the age-old secret: that vampires exist among the living?

Collects #1 to #5 of the ongoing series.
Tini Howard is a writer and swamp witch from the Carolina Wilds. Currently, she writes Vampire: the Masquerade: Winter’s Teeth from Vault Comics, Euthanauts, Assassinistas (with Gilbert Hernandez) and Hack/Slash: Resurrection, with occasional stories for two of her favorite things: Rick and Morty and WWE. She lives with her husband, Blake, and her sons, Orlando and General Hugs, who are cats.

TIM SEELEY is one of those “slash” people…a writer-slash-artist. He has drawn a number of different comic book series including G.I JOE, HALLOWEEN, WILDCATS and ANT-MAN & WASP. His writing work include NIGHTWING, MONEY SHOT , INJUSTICE v. MASTERS OF THE UNIVERSE ,the critically acclaimed REVIVAL, and the NY TIMES bestselling HACK/SLASH. He resides in Chicago, Illinois with his wife, daughter and 80s action figure collection
Hometown:  Chicago, IL
https://www.timseeleycreative.com/
https://twitter.com/HackinTimSeeley
https://www.instagram.com/timseeley/
https://www.amazon.com/Tim-Seeley/e/B00J7Z2Y4E

An award-winning illustrator and sequential artist, Nathan C. Gooden is Art Director at Vault Comics. Nathan studied animation at the Pratt Institute in Brooklyn, and worked in film production, before co-founding Vault Comics. Nathan’s previous works include Brandon Sanderson’s Dark One (Vault), Barbaric (Vault), Zojaqan (Vault), and  Killbox (from American Gothic Press). He lives in Southern California, where he plays a lot of basketball and hikes constantly with his wife.

Addison Duke is an illustrator and a comics colorist based in Chicago, IL

After graduating with a BFA in illustration from Academy of Art University, Addison began his professional career working as a Production Artist at Image Comics. Today, he continues to cultivate his professional freelance comic coloring, illustration, and fine art working both with digital and traditional mediums.

Jim Campbell is a twice-Eisner-nominated comic-book letterer, one-time writer (perhaps again in the future!) and occasional artist (although his enthusiasm rather outstrips his actual ability). He knows more about print production than mortal man was meant to know and has also scanned more images than you've had hot dinners. Unless you're ninety years old.