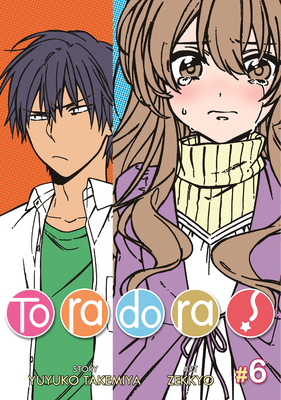 This is book number 6 in the Toradora! (Manga) series.

DADDY’S LITTLE GIRL The gang is back in school and it’s nearly time for the Culture Festival. Ryuuji and Taiga and the rest of Class 2-C can’t figure out what to do for the event, until a random lottery pick tasks them with presenting... a pro-wrestling performance?! Over on the home front, Taiga’s dad has decided to pop back into her life. The possibility of a divorce with his current wife could mean a reunion with his estranged daughter, but Taiga doesn’t trust the old man. Ryuuji feels conflicted. While he hopes for a happily-ever-after between father and daughter, it could spell the end of his own “domestic bliss” with Taiga.
Yuyuko Takemiya is a Japanese writer of light novels. She is the author of Watashitachi no Tamura-Kun. Zekkyo is a Japanese manga artist and illustrator whose works include Druid-San, Welcome and Jyutten!

“A romance of warmth and humor with an uncanny ability to dodge the excesses of the genre while exploiting all the joys it has to offer.” —ANIME NEWS NETWORK

“Toradora! is a lot like it's subject matter: In turns hilarious, rambling, confused, charming, and foolish, but ultimately a worthwhile and heartwarming experience.” —ANIME-PLANET