Maat Philosophy Versus Fascism and the Police State Vol. 2 (Paperback) 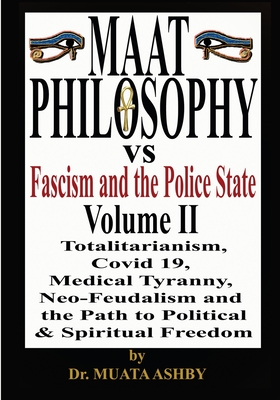 Maat Philosophy Versus Fascism and the Police State Vol. 2 (Paperback)

This book is written from the perspective of an ethicist examining the political and economic system of Western culture in general and the United States in particular. It found that the Western countries were moving follows the findings of MAAT VS FASCISM Volume I (2014) which found that the malfeasance and corruption of western politics and economics, focusing on the United States, as the leading Western country, were heading towards a fascistic police state condition. This new follow-up volume details how the Western culture has progressed towards and has become a full fascistic government and economic system and how it continues the march towards a greater and more absolute control, surveillance, propaganda state. This new volume also details the use of an apparently manufactured pandemic to usher in the draconian aspects of the fascist surveillance police state through scientific fear inducement coupled with medical tyranny in order to usher in an excuse for imposing experimental chemical therapies, and forcing impoverishment, mental debilitation, social traumas, dis-empowerment and absolute control on the population.

This volume also shows a pathway from understanding how and why the degradation of society has occurred to what individuals and groups need to do to re-empower themselves. The re-empower occurs first through developing understanding of the social, political and economic traumas imposed on the population. Then ethical conscience and spiritual strength are to be developed, followed by applying that ethical conscience to conscious living and ethical actions that directly promote natural mental and physical health. Next, using that health, the task is to oppose the fear based delusions perpetrated by the sociopathic, charlatan politicians and corporate leaders imposing the fascist surveillance police state on the population. The opposition is physical, spiritual, civil, and legal. MAAT PHILOSOPHY wisdom holds answers for confronting the ills of negative members of a society. It also holds keys for self-empowerment and spiritual evolution that every healthy individual needs in order to have a viable and sane society that will not believe in, tolerate or support craven sociopathic and rapacious leadership that will lead the society to its demise.