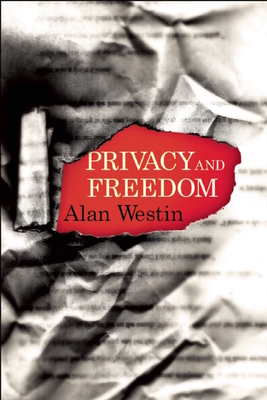 He was the most important scholar of privacy since Louis Brandeis.--Jeffrey Rosen

In defining privacy as "the claim of individuals...to determine for themselves when, how and to what extent information about them is communicated," Alan Westin's 1967 classic Privacy and Freedom laid the philosophical groundwork for the current debates about technology and personal freedom, and is considered a foundational text in the field of privacy law.

By arguing that citizens retained control over how their personal data was used, Westin redefined privacy as an individual freedom, taking Justice Louis Brandeis' 19th century definition of privacy as a legal right and expanding it for use in modern times. Westin's ideas transformed the meaning of privacy, leading to a spate of privacy laws in the 1970s, as well as prefiguring the arguments over privacy that have come to dominate the internet era. This all new edition of Privacy and Freedom features an introduction by Daniel J. Solove, John Marshall Harlan Research Professor of Law at the George Washington University Law School.

Alan Westin (1929-2013) was a Professor of Public Law and Government at Columbia University. His research in the 1960s is widely seen as the first significant work on the problem of consumer privacy and data protection. His 1967 book Privacy and Freedom was a pioneering work that prompted U.S. privacy legislation and helped launch global privacy movements in many democratic nations in the 1960s and 1970s.