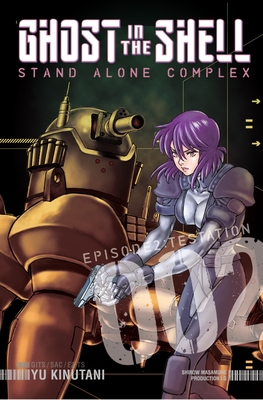 
Usually Ships in 1-5 Days
Ghost in the Shell: Stand Alone Complex takes place in the year 2030, in the fictional Japanese city of New Port. The story follows the members of Public Security Section 9, a special-operations task-force made up of former military officers and police detectives. The manga presents individual cases that Section 9 investigates, along with an ongoing, more serious investigation into the serial killer and hacker known only as "The Laughing Man."

THE BEST OFFENSE IS A STRONG DEFENSE?

An advanced tech tank is on the loose and appears hell bent on heading into the city. To make matters worse, it has impenetrable defenses and all conventional efforts to stop its progress have failed. Now it's up to Major Kusanagi and Section 9 to find a way to stop the tank's inexorable march toward an unknown fate in the city!

"Stand Alone Complex is a series that truly fills that craving need I have for a solid action series that's filled with adult characters." - AnimeonDVD.com (from a review of the anime)