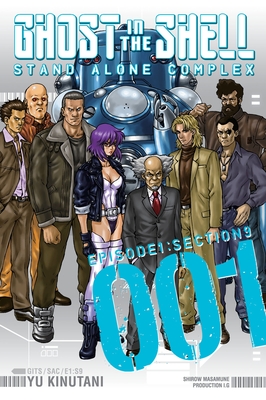 
Email or call for price
Stand Alone Complex takes place in the year 2030, in the fictional Japanese city of New Port. The story follows the members of Public Security Section 9, a special-operations task-force made up of former military officers and police detectives. The manga presents individual cases that Section 9 investigates, along with an ongoing, more serious investigation into the serial killer and hacker known only as "The Laughing Man."

When a high-ranking government official is kidnapped, the Prime Minister must call in his top crime fighting force known as Section 9. Lead by the beautiful (and deadly) Major Kusanagi, the cybernetically enhanced squad must use all their skill to take down the kidnappers and rescue the hostages. But that’s only half of the mission; can Kusanagi and company find out who’s behind the kidnapping, and, more importantly, just what they’re after? Find out in this thrilling first volume of The Ghost in the Shell: Stand Alone Complex!

"Stand Alone Complex is a series that truly fills that craving need I have for a solid action series that's filled with adult characters." - AnimeonDVD.com (from a review of the anime)