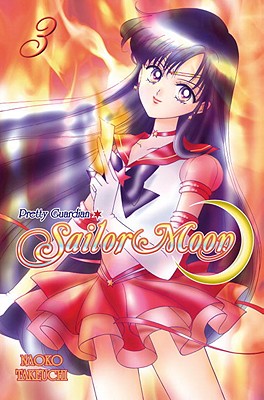 This is book number 3 in the Sailor Moon series.

Tuxedo Mask gone bad?! As more of her closest allies fall under the power of the evil Queen Beryl, Usagi comes closer to discovering the truth behind her past. The stage is set for an all-out battle for the fate of Earth between the Sailor Guardians and the forces of evil. But when the dust settles, a little girl calling herself “Usagi” falls from the sky and right into the arms of Mamoru. What is her connection to Sailor Moon and why does she want the Legendary Silver Crystal?

- An entirely new, incredibly accurate translation!
- Japanese-style, right-to-left reading!
- New cover art never before seen in the U.S.!
- The original Japanese character names!
- Detailed translation notes!
Naoko Takeuchi lives in Tokyo, Japan. Takeuchi's works have a wide following among anime and manga fans worldwide. Her most popular work, Sailor Moon, rose to become one of the most recognized manga and anime to date, and with this reissue, it has once again taken its place as one of the most popular manga in America.