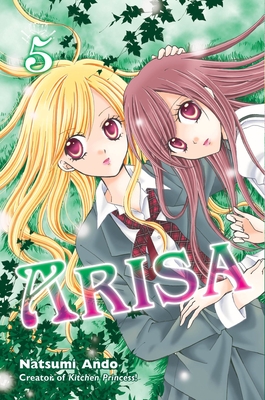 This is book number 5 in the Arisa series.

Twin sisters, Arisa and Tsubasa, are separated by their parent's divorce. But after her sister's suicide attempt, Tsubasa is determined to go undercover and unravel the conspiracy behind the elusive King. But, right now, the King's wish granting abilities may have fallen into the wrong hands... and the results may prove to be deadly to Tsubasa and Class 2B!

Includes special extras after the story!
Born January 27th in the Aichi prefecture of Japan, NATSUMI ANDO won the prestigious 19th annual Nakayoshi Rookie Award in 1994 for her debut, Headstrong Cinderella. Her other popular series include Zodiac P.I. and Kitchen Princess. Her hobbies include reading, watching movies, and eating delicious food.
"A well done mystery, a sophisticated story wrapped in sweet, sweet shoujo art." -Mangablog.net
"The blend of wide-eyed shojo story with encroaching personalized horror is well handled. 3.5 Stars out of 5." - ICV2.com