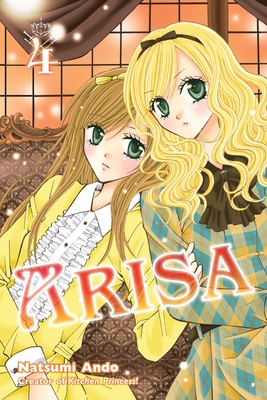 This is book number 4 in the Arisa series.

ONCE UPON A KING

When her sister's boyfriend, Midori, leads her to his cell phone, Tsubasa finally gets a chance to meet the King. But the mysterious Kudo is determined to prove that people are base creatures who betray and reveal your secrets. After another betrayal can Tsubasa ever trust anyone, including her own sister, Arisa?

Includes special extras after the story!
Born January 27th in the Aichi prefecture of Japan, NATSUMI ANDO won the prestigious 19th annual Nakayoshi Rookie Award in 1994 for her debut, Headstrong Cinderella. Her other popular series include Zodiac P.I. and Kitchen Princess. Her hobbies include reading, watching movies, and eating delicious food.
"A well done mystery, a sophisticated story wrapped in sweet, sweet shoujo art." -Mangablog.net
"The blend of wide-eyed shojo story with encroaching personalized horror is well handled. 3.5 Stars out of 5." - ICV2.com