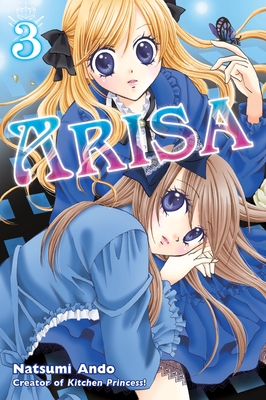 This is book number 3 in the Arisa series.

IN THE SHADOW OF THE MOON

Tsubasa hunt for The King thickens when Arisa's class goes to a planetarium to watch an eclipse and The King makes a decree that turns the chosen against each other. Later, suspicion mounts on Midori, who asks Tsubasa on a date! Can Tsubasa save the day from The King, and protect the stars in her sister's sky from ill fates?

Includes special extras after the story!
Born January 27th in the Aichi prefecture of Japan, NATSUMI ANDO won the prestigious 19th annual Nakayoshi Rookie Award in 1994 for her debut, Headstrong Cinderella. Her other popular series include Zodiac P.I. and Kitchen Princess. Her hobbies include reading, watching movies, and eating delicious food.
Selected as the "Best New Shojo Manga 2010" by About.com:Manga
A "Best Manga of 2010" pick by iFanboy.com
"A well done mystery, a sophisticated story wrapped in sweet, sweet shoujo art." -Mangablog.net
"The blend of wide-eyed shojo story with encroaching personalized horror is well handled. 3.5 Stars out of 5." - ICV2.com