The Thing's Incredible! The Secret Origins of Weird Tales (Paperback) 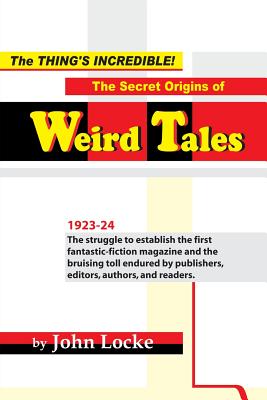 The Thing's Incredible! The Secret Origins of Weird Tales (Paperback)

The Thing's Incredible is a sweeping revisionist history of the founding of Weird Tales, one of the most influential and entertaining pulp magazines of them all. Its first two years (1923-24) was a period of tumult and controversy unequalled in the pulps, before or since, an experience so painful to its creators that they immediately banished their memories to secrecy, their code of silence suppressing the story for almost a century. Here at last is the true saga, the unraveling of the many twisted threads which have bound the creation of Weird Tales in mystery.

Who were Henneberger and Lansinger, the co-founders, and what circuitous chain of events brought about their doomed destiny? How did the first editor, the outspoken and uncontrollable Edwin Baird, become the wild man of the pulps? What dark secrets lay buried in second editor Farnsworth Wright's haunted past that he never dared speak of? What was the significance of the constantly mutating "reorganization" that united two legends, world-famous magician Houdini and horror author H.P. Lovecraft, into a grand nexus of weird? How did Henneberger lose control of his slow-motion disaster of a magazine? And how did an all-out war behind the scenes lead to the long peace of the Wright years?

This is the epic story of the challenges in establishing a radical, new magazine in the early 1920s--and not just any magazine, but the immortal Weird Tales.