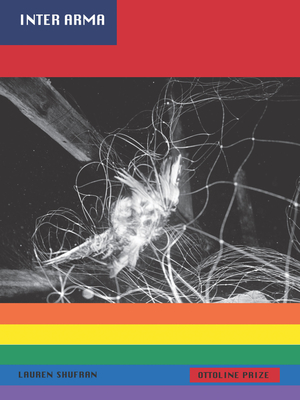 This debut collection takes its title from a maxim of Cicero's that, translated loosely as "In times of war the law falls silent," has been effective in recent discourse around the erosion of citizens' rights. Lauren Shufran employs a sprightly, activated boot-camp cadence in her metrically rigorous poems to look closely at the uncomfortable positions our military interventions put us in.

Riffing on military chants, propulsive rhythms whereby submission and domination are inculcated, these chatty, allusive, classically informed poems explore analogies of terrorism and homosexuality in the context of our militarized media, our mediated military. Internalized rhymes, lyric baubles, and glittery, hyphenated memes insist on trainings and missions wherein heroes and villains are sodomized and lionized, penetrated and perpetuated.

From Afterwards They Photographed my Veteran Face, f/4 at 500:

The aperture where pussyfooting loses depth
Of field like summary exposures. Doubt-
Ful of my fealty I'd procured a honey who
Was made of honey-indicators: form
In cock and crockery. I souse his dish with glaze
To make it lachrymose and vitreous,
Get myriad shaft fractures in his forearms and
His saucers, and high incidences of
Throw-Downer's Sprain from over-wedging. I put the
Clay up on the wheel; I make a hole there.

Lauren Shufran received an MA in English and MFA in poetry from San Francisco State University and is currently a PhD candidate at the University of California at Santa Cruz, where she studies Renaissance lyric and religious enthusiasm in seventeenth-century England. This is her first full-length book.