Complete Gettysburg Guide: Walking and Driving Tours of the Battlefield, Town, Cemeteries, Field Hospital Sites, and Other Topics of Historical I (Hardcover) 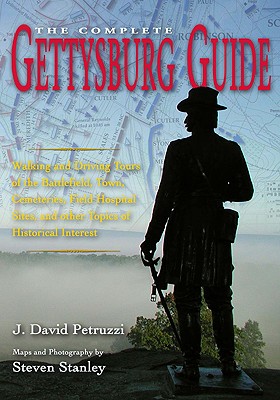 Complete Gettysburg Guide: Walking and Driving Tours of the Battlefield, Town, Cemeteries, Field Hospital Sites, and Other Topics of Historical I (Hardcover)

Some two million people visit the battlefield at Gettysburg each year. It is one of the most popular historical destinations in the United States. Most visitors tour the field by following the National Park Service's suggested auto tour. The standard tour, however, skips crucial monuments, markers, battle actions, town sites, hospital locations, and other hidden historical gems that should be experienced by everyone. These serious oversights are fully rectified in The Complete Gettysburg Guide, penned by noted Gettysburg historian J. David Petruzzi and illustrated with the lavish, full-color photography and maps (70) of Civil War cartographer Steven Stanley.

- Detailed driving and walking tours of the entire battlefield (including obscure sites that even veteran visitors miss or never hear about);
- A tour of every identified field hospital site for both armies;
- Tours of the National Cemetery and the town's Evergreen Cemetery;
- A tour of the town of Gettysburg, including sites of historical interest before and after the battle;
- Outlying battlefields including the June 26, 1863 skirmish site, East Cavalry Field, South Cavalry Field, Hunterstown, Hanover, and Fairfield;
- And a special tour of the various rock carvings on the battlefield, many of which were created by returning veterans and pre-date most of the monuments.

About the Authors: J. David Petruzzi is widely recognized as one of the country's leading Gettysburg experts. In addition to his numerous articles for a wide variety of publications, he is the author (with Eric Wittenberg) of bestsellers Plenty of Blame to Go Around: Jeb Stuart's Controversial Ride to Gettysburg (Savas Beatie, 2006) and (with Wittenberg and Michael Nugent) One Continuous Fight: The Retreat From Gettysburg and the Pursuit of Lee's Army of Northern Virginia, July 4-14, 1863 (Savas Beatie, 2008). Petruzzi is also a popular speaker on the Civil War Roundtable circuit and regularly conducts tours of Civil War battlefields.

Steven Stanley lives in Gettysburg and is a graphic artist specializing in historical map design and battlefield photography. His maps, considered among the best in historical cartography, have been a longtime staple of the Civil War Preservation Trust and have helped raised millions of dollars for the Trust through their preservation appeals and interpretation projects. Steve's maps have appeared in a wide variety of publications.