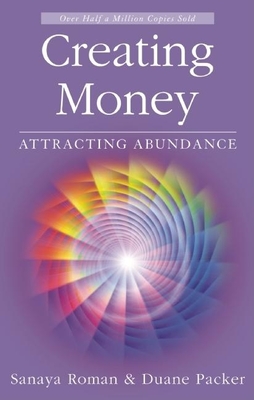 
Usually Ships in 1-5 Days
This book is a course in manifesting and creating abundance in your life, Section I, Creating Money, is a step-by-step guide to the art of manifesting. You will learn how to discover what you want, drawing things to you that will fulfill and satisfy you, that are even better than what you ask for. You will learn advanced techniques of manifesting and how to work with your own energy and the power of magnetism to draw things into your life in the fastest, easiest way possible.

The second section of this book, Developing Mastery, will help you learn to work with and move through any blocks you may have about allowing abundance into your life. The third section, Creating Your Lifes Work, will help you learn to make money and create abundance through doing the things you love. You will learn many simple energy techniques to draw your ideal job to you, discover your life's work, and do what you love for a living. The fourth section, Having Money, is about having and increasing money and abundance in your life. You will learn how to create joy, peace, harmony, clarity, and self-love with your money, letting it flow and increase.

Sanaya Roman has been channeling Orin, a wise and gentle spirit teacher, for more than twenty years. All of Orin's work assists people in unfolding their potential, finding their inner wisdom, and in growing spiritually. Sanaya is currently working with Orin on the Soul Life series of books. Sanaya graduated Phi Beta Kappa from the University of California at Berkeley. She has studied metaphysics for years and now teaches graduate light body seminars with Duane Packer and his guide, DaBen. She lives in Oregon. Duane Packer is a gifted clairvoyant who can see the energy fields in and around the body. He has extensive skill in assisting others to reach expanded states of consciousness and to sense subtle energies. He has a scientific background (a Ph.D. in geology-geophysics) and broad bodywork training with years of intensive experience. He lives in Oregon. Website: www.orindaben.com

Network Quarterly, October 1997
Money is one form of abundance that occupies most peoples minds at one time or another. When I read the preface, I discovered this book included channeled information. After reading it, I dont care who wrote it. Its good. It offers a common-sense, spiritualistic approach to creating what you want in your life.

Aquarius, Sign of the Times, February 1998
If you were to ask a group of fifty people if they would like to be wealthy, chances are good that all would say yes. If you asked them what they'd do with the money, some would say they'd quit their jobs, travel or buy a bigger, better house. Still, many would say they'd change careers, do the work they've always wanted to do.

Its a fact that a greater percentage of the planets population is working at ill-fitted jobs, and, they believe, ill-fated. But the truth is what you have and where you are today are the results of all the choices and decisions you have made, and many have been based on past programming rather than on the new unlimited thinking, as taken up in Sanaya Roman and Duane Packers book Creating Money: Keys to Abundance. This book, filled with a wealth of advice channeled to the authors from their spirit guides, was first published ten years ago, and applies more than ever today.

The New Times, March 1989
This book is about more than creating money, although that is the primary focus. Whether we like it or not, the Earth plane still uses money as the system of exchange of energy. Many people within the New Age have wonderful ideas they would like to implement but which are often foiled from the beginning partially due to lack of funding. The approach used in Creating Money is that in order to manifest many of our visions and dreams, money is needed and learning how to have money and use it to higher purposes is a good goal to attain.

John Harricharan for Body Mind Spirit magazine, September/October 1988
Many books have been written about money and how to get it, but most times they are filled with impractical and theoretical ramblings. Creating Money by Sanaya Roman and Duane Packer is a refreshing change. The authors have created an extremely practical and useful book to assist anyone who has money problems.The book is divided into four sections, each dealing with certain aspects of the money problem, but all four blend together in such a way as to give the reader one of the most practical guides for becoming wealthy. Roman and Packer do not preach, but gently lead you through a myriad of universal truths that impact directly on your pocket book or bank account.

A series of practice exercises combined with a number of worksheets (which the authors call playsheets) assist the reader in following the true essence of the manuscript and, at the same time, serve as a summary for some of the more important areas of focus.

For all those who have ever had problems with money, for those who are struggling to make a living, or for those who simply would like to improve their quality of life, this book is a candidate for the Required Reading List. It should be re-read many times and occupy a prominent place on your bookshelf.