Dog Team to Dawson: A Quest for the Cosmic Bannock and Other Yukon Stories (Paperback) 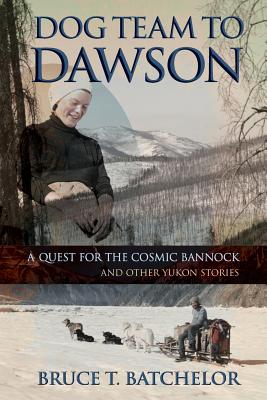 Dog Team to Dawson: A Quest for the Cosmic Bannock and Other Yukon Stories (Paperback)

Dog Team to Dawson is a nostalgic collection of true Yukon stories written by bestselling author Bruce Batchelor. A Quest for the Cosmic Bannock is the account of two young people travelling by dog team, tackling a long-abandoned Gold Rush era route while wrestling with thoughts about their own destinies. Cost-Plus illustrates how greed and modern equipment cannot trump Nature - unless one is very lucky. In Trapping the Mad Trapper, Batchelor mines a 1932 account by Old Crow nurse Helen Thornthwaite to reveal how Yukoners played the major roles in stopping Albert Johnson's escape attempt. Love Story for Lucy is a tender tribute to the bond between man and dog.

Dog Team to Dawson is the prequel to Bruce Batchelor's Nine Dog Winter, providing readers of that classic account with earlier adventures into the heart and soul of the Yukon Territory.

Bruce Batchelor lived in Canada's Yukon during the 1970s and early 1980s, travelling extensively throughout the territory, fascinated by the wilderness and the people who chose to live in the bush. His Northern stories have appeared in magazines and newspapers, and in the books Yukon Channel Charts, The Lost Whole Moose Catalogue and Nine Dog Winter. He is also author of Book Marketing DeMystified.

Bruce Batchelor is an editor and publisher, living in Victoria, BC, with his wife Marsha, their son Dan and a gentle black dog named Browser.

Reviewer comments on Bruce Batchelor's books
"A real page turner and delightful read. An instant classic about Canada's North."
"I LOVED reading it. Bruce has a rare gift among writers: he writes like he speaks. His 'voice' comes through as if you are sharing a hot cocoa by the fireside."
"The book is bursting with love. People with each other. People with dogs. Dogs with people. Everybody with the outdoors."
"A fascinating story and a great read. We recommend it highly."