My Shadow Is Purple (Hardcover) 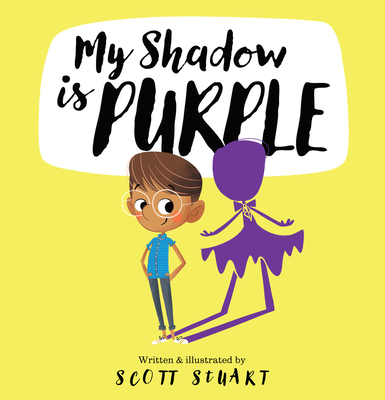 My Shadow Is Purple (Hardcover)


Usually Ships in 1-5 Days
My Dad has a shadow that’s blue as a berry, and my Mom's is as pink as a blossoming cherry. There’s only those choices, a 2 or a 1. But mine is quite different, it’s both and it’s none. A heartwarming and inspiring book about being true to yourself and moving beyond the gender binary, by best-selling children's book creator Scott Stuart.
Scott Stuart is father to a six-year-old boy who loves all things Queen Elsa and princesses. Their story of dressing up as Elsa together became a social media phenomenon. Having worked at The Royal Children's Hospital, he has seen how important it is for children to feel represented and is committed to creating stories of empowerment.

He is the author of the bestselling My Shadow Is Pink, and has appeared on The Today Show and in such publications as People Magazine, Buzzfeed, Huffington Post, Pop Sugar, Parents.com, and more.
"I'm always on the lookout for kids books that challenge gender stereotypes and empower kids to embrace their true selves, and this book does so beautifully. . . . Through playful rhyming text the author shines a light on diversity, being true to yourself, respecting others, and understanding that there are many experiences across the gender spectrum. . . .The illustrations in this book burst with joyful colour, radiantly showing young readers the many ways in which we can be our true selves. This heartwarming follow-up to the hugely popular My Shadow is Pink is sure to win hearts everywhere." —Aussie Kids Books

"Best-selling children’s book creator, Scott Stuart, follows his internationally acclaimed title, My Shadow is Pink, with another heart-warming story about being true to yourself, just as you are. . . . With plenty of opportunities for conversation starters, the theme of gender as non-binary has been artfully distilled into an accessible read for young children and families." —Australian Arts Review

"Affirming.” —Foreword Reviews, starred review of My Shadow Is Pink


“Stuart isn’t just making up stories here—he’s living the support he writes about. [His] take on the theme stands out for its focus on the relationship between the child and his dad and on societal ideas about masculinity.” —Mombian, an LGBTQ parenting blog on My Shadow Is Pink