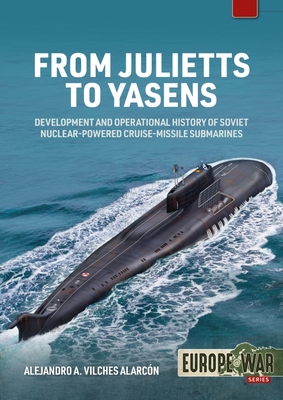 By Alejandro A. Vilches Alarcón


Coming Soon - Available for Pre-Order Now
In the aftermath of the Second World War, the Soviet Union embarked upon the rebuilding of its naval forces for a new era of naval warfare; one dominated by Western nuclear-armed aircraft carriers that posed an existential threat to the USSR.

One solution to the problems facing the Soviet Navy was to develop submarines armed with large, heavy, long-range stand-off anti-ship cruise missiles. These unique combinations of platforms and weapons systems would come to pose a threat that forced the US Navy to adapt its own naval strategy and equipment to counter them.

While never used in anger in their intended role, life aboard these submarines could be extremely hazardous for their crews, with a number of accidents - including the total loss of boats such as the Kursk - claiming many lives.

From Julietts to Yasens is a comprehensive history of the design of the SSG and SSGN submarines, their weapons systems, and service history from the 1950s through to the present day, and includes details of the numerous accidents and incidents.

This volume is illustrated with many black and white and color photographs, and specially commission artworks of the submarines, the missiles they carried, and the men who crewed them.