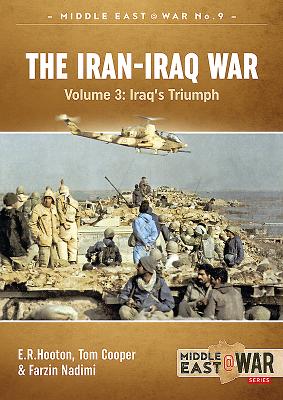 This is book number 9 in the Middle [email protected] series.

The Iran-Iraq War was one of the bloodiest conflicts of the 20th Century and accidentally created the current nightmare of Islamic fundamentalist terrorism. There have been many books on the conflict but this is the first detailed military history using materials from both sides, as well as materials obtained from US Intelligence circles and British Governmental archives. It provides a unique insight into a war which began through miscalculation and rapidly escalated into the longest conventional conflict in the post-Second World War era. The third volume covers the last two years of the war on the Southern front, where Iranians made their last supreme effort to break through Iraqi lines during the winter of 1986-1987. Iraqi defences just about held. For a year, there was an ominous silence, but then Iraq launched a series of devastating blows that recovered the Faw Peninsula, pulverised weakly-occupied Iranian positions, and drove the frontlines back to the international border. Iran was left with no option but to sue for peace.