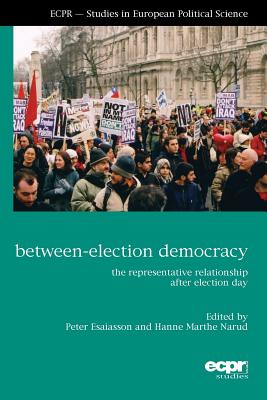 
Usually Ships in 1-5 Days
Challenged by the notion that the system of government known as 'representative democracy' is more elitist than is commonly assumed, contributors to this book seek new approaches to empirical studies on the relationship between citizens and their chosen representatives. The book focuses on the way in which representatives and citizens interact during mandate periods between elections. It contributes in three ways to previous research on the representative relationship. First, by thinking broadly about between-election phenomena, it integrates research literatures which study representative relationships parallel to each other, on separate tracks. Second, it aspires to identify questions that have remained unanswered, or even unidentified, in previous representation research. Third, it suggests a reconceptualisation of 'responsiveness', which acknowledges that representatives are required to communicate their reason for actions but not necessarily to adapt to citizens' wishes and views.
Hanne Marthe Narud (1958-2012) was professor of political science at the University of Oslo. Her main research focus was on coalition behaviour, political recruiting, and voting behaviour. She published articles in Comparative Sociology, European Journal of Political Research, Electoral Studies, West European Politics, Scandinavian Political Studies, Party Politics, Journal of Legislative Studies, Journal of Theoretical Politics and Acta Politica, in addition to numerous contributions to books in Norwegian and English. She also wrote a book with Henry Valen on political representation in a multiparty system. She was frequently called upon to commentate on Norwegian politics in the news media. Peter Esaiasson is professor of political science at the University of Gothenburg. He has published several books on political representation, election campaigning and empirical democratic theory. His articles have appeared in journals including the British Journal of Political Science; European Journal of Political Research; Electoral Studies; Governance; European Political Science Review and Party Politics.