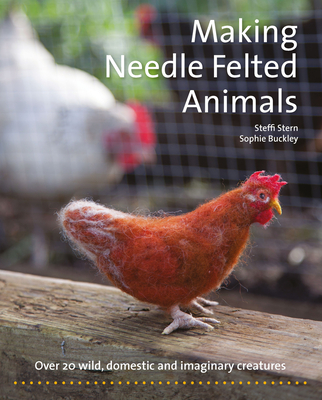 
Email or call for price
This book is an essential guide for anyone interested in the popular craft of needle-felting. Whether you are completely new to needle-felting or an experienced felter, this book has something to offer, from precise instructions to creative inspiration. Written by two authors, experienced in making and teaching crafts to students of all ages and abilities, instructions are easy to follow and include practical yet creative ideas to fix common mistakes. Projects arise from a genuine love of the natural world and animals, whether they be family pets (‘Our Friend Dexter’) or wild animals whose widespread ill-treatment has brought them into the limelight. Requiring no experience other than an interest in working and playing with wool, projects progressively build on skills throughout, and will transform you into an avid needle-felter in no time at all. • Beautiful photographs and illustrations throughout• Over 20 patterns and design ideas for creating your own needle-felted animals• A range of projects suitable for complete beginners as well as more advanced crafters• Written by experienced crafters and workshop leaders, this practical guide also highlights common mistakes (‘felting bloopers’) and offers creative solutions to fix them• Inspired by the natural world and animals from well-loved stories and myth, these projects aim to engage us in, and re-connect us more fully to, the worlds of art, imagination, play and nature
Steffi Stern owns Mother Goose craft shop and events space in Nailsworth, Gloucestershire. She was born in Germany and, encouraged by her mother’s own passion for knitting and crochet, enjoyed the German handcraft tradition at a young age. Steffi is now the mother of four and continues to craft with and for her young children. Inspired by her love of good quality materials and commitment to making meaningful handcrafts, she founded Mother Goose in 2010.Sophie Buckley runs and leads workshops at Mother Goose in Nailsworth, and is primarily a crochet and needle-felt artist working in the Cotswolds area. She was brought up creating and went on to study contemporary crafts at Falmouth University College where she began specialising in textiles. She is an experienced workshop leader and has worked with adults of all abilities.
Are you a fan of creating needle felted projects? Me? Not so much. I like needle felting for adding details to other projects (hello wall-hangings with needle felted clouds and spotted toadstools!); however, 3D needle felting, frankly, left me feeling bamboozled. Then the new needle felting book from Hawthorn Press, Making Needle Felted Animals by Steffi Stern & Sophie Buckley, landed on my doorstep. Goodbye bamboozlement. As soon as it arrived, I sat down at the kitchen table with the new book, becoming lost in the gorgeous photography, the friendly tone of the written instructions, and the personal stories which breathe spirit into each project. Emerging an hour later, I felt confident that I really could turn a big ball of fluff into a pretty little creature. (Though, full disclosure: Steffi wrote a preface for my second book Making Peg Dolls & More, while Lucy Guenot was the designer for this new book as well as both of my own, so I had an inkling that the book would be lovely!) Of all the projects in Making Needle Felted Animals (birds, wildlife, pets, garden creatures, etc...), the one which captured my heart most was Mole from Wind in the Willows. In the picnic tableau above, you can see Mr. Toad, Mr. Badger & Mole; and although he is not depicted in this photo, there are instructions within the book for Ratty, too (at the moment this photo was snapped, surely Ratty was over by the boat, fetching an overstuffed wicker luncheon-basket). I had a variety of Corriedale roving in my stash, but for this project I visited A Child's Dream to purchase some Romney wool (dyed by Wilde Wool) and was pleased with how quickly it felted up (my children liked it, too, and kept absconding with bits of fluff to work up into their own projects). My only moment of panic occurred when I needed to convert grams to ounces. This is an important detail for readers in the United States as wool in the US is usually sold by the ounce (the authors of Making Needle Felted Animals specify in grams). FYI: 1 ounce = approx. 28 grams. You're welcome! After an hour of needle felting, I ended up with a perfectly podgy mole who is hilariously near-sighted (you can see him squinting myopically at photos of himself in the image above). The advent of this funny fellow has inspired a spate of reading books containing mole characters; there is, of course, Wind in the Willows(we love this version with illustrations by Inga Moore), a less agreeable mole in Hans Christian Andersen's Thumbellina, and a most agreeable mole in The Mushroom Man by Ethel Pochocki. - http://webloomhere.blogspot.co.uk -

As I write this, my children are on bird watch. You see I have a rather vulnerable blue tit perching on our bird table and I want to know what fellow feathered friends think of it. Will it be rejected, accepted or completely confuse those attempting to land on said feeding plat-form? First reports come in. “Mummy, it has managed to scare off the magpies. They tried to attack, then flew off afraid.” Hmm, interesting. That’s a huge achievement by the way, for magpies, pigeons and even seagulls have managed to steal the five-star Spiers gourmet bird food before their smaller flying companions get a chance. So how come this little blue tit has been left alone to fend for itself against such big birds? Let me tell you a secret. My blue tit may look surprisingly life-like, but it isn’t real. Instead it is my needle-felted version made according to the very clear and concise instructions laid out in what can only be described as the needle felt Bible - a brand new craft book, launched this month, called Making Needle Felted Animals, written by Steffi Stern and Sophie Buckley. It is an enchanting book which not only inspires the reader to create, but helps them do so in an easy, comprehendible and unpatronising way. All that is needed is a felting needle, some felting wool, a felting mat and an alert pair of eyes so one stabs the wool and not the finger. This is sculpture in its least messy form. No plaster, clay or resin - just pure, richly-coloured, soft glorious wool. It is probably the best way of getting out emotion and is the perfect therapy for a stressful day or indeed if you need a little space to unwind. The reward is a physical one - a stunning wild, domestic or imaginary creature right before you. Published by Stroud-based publisher Hawthorn Press, Making Needle Felted Animals, a 128-page, illustrated paperback manual is written in a personal way so that each animal has its own story to tell. “Martin Large from Hawthorn Pressapproached us two years ago and asked us if we would write the book. It took us 18 months to write and to work out which animals to include. Each animal has its own reason for appearing in the book and is accompanied by a short story or quote. We were delighted when Jayne Emerson, who featured on Kirstie Allsopp’s Handmade Britain, agreed to write the foreword,” explains mother of four, Steffi who owns popular shop Mother Goose, in Nailsworth, a regular haunt for those who enjoy making and creating. Sophie, who I first met when I had the privilege of interviewing her a few years ago, when she was a new graduate with her stunning collection of coral-inspiredcrochet masterpieces, runs many workshops at Steffi’s shop. Steffi and Sophie will now be offering needle felting workshops and have set up a new business, called The Makerss (double s for their names) off the back of the book and will be selling special kits for people to make specific creatures from their book. These include a tortoise, fox, butterfly, Wind in The Willows characters, and even the lessattractive garden creatures such as the slug! A special book launch takes place at Mother Goose on Saturday, July 11, from 11am-3am where Steffi and Sophie will be offering demonstrations on needle felting and giving people a chance to meet theanimals featuring in the book. “We will also be giving those who come along the chance to needle felt a small creature or flower to add to our wool garden which we are hoping to become an ongoing community project,” says Steffi. “It feels special to see it all come together and to be able to hold the book. The photographs and the illustrations have brought it to life and have done the felt making animals complete justice to make it a really magical book,” she adds. I am privileged to be their guinea pig (and no he is not in the book) and manage to work my way through the whole blue tit making process, from weighing out the wool, to moulding and poking the wool thousands of times with my needle, adding colour whilst constantly referring back to my excellent guidebook to make sure he looks right. I am fed delicious cake from Nom Nom Cupcakery, also based in Nailsworth’s Market Street, but my blue tit looks as if he has eaten it as I make him a little too chubby. Further stabbing is needed to slim him down but alas he remains larger than this petite bird deserves. Perhaps that is why the magpie is Nothing fuzzy about felting Tracy Spiers de-stresses with a felting needle and inspirational book - Tracy Spiers - Nothing fuzzy about felting