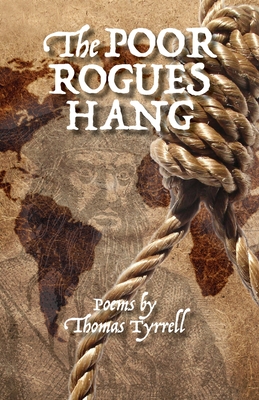 'Of famous Captain Avery / And how he went a-pirating.'

Brave, anarchic folk heroes or cruel, black-hearted villains? In the long violent history of piracy, the men and women who roamed the oceans under the black flag have been both of these and all shades of chivalry and chicanery in between.

Now Thomas Tyrrell's debut collection, The Poor Rogues Hang, written with the rhythmic swagger of the ballad and the shanty, retells the stories of the intrigues, robberies and murders of the most notorious pirates, freebooters, sea rovers, corsairs, buccaneers, marauders and all-round bad eggs from the 'golden age' of piracy and beyond.

You may have heard of Blackbeard or Captain Kidd, but did you know about Grainne Mhaol, the Irish pirate queen? Did you know pirates once kidnapped Julius Caesar? Tyrrell illuminates their savage, surprising and little-known careers using a pleasing variety of poetic forms, numbering among them ballads, ballades, blank verse, fourteeners, quatrains, sapphics, sonnets, syllabics, and even free verse.

So splice the mainbrace, set sail and join him as he delves into the sour history of piracy's entanglement with the slave trade, the surprisingly democratic way a pirate ship was run and the social injustices and human failings that drove men to a life from which there was no turning back until the inevitable violent end. Drink up me hearties, yo ho