To Befriend an Emperor: Betsy Balcombe's Memoirs of Napoleon on St Helena (Hardcover) 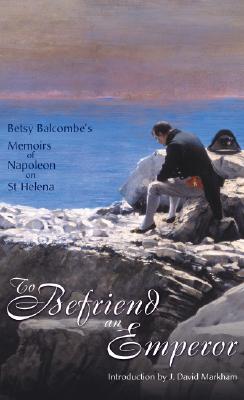 To Befriend an Emperor: Betsy Balcombe's Memoirs of Napoleon on St Helena (Hardcover)


Email or call for price
Young Elizabeth Balcombe, or Betsy to friends and family, found life on the remote island of St Helena intolerably dull. Most fourteen-year-olds would. Her father had been posted to that unforgiving station in the Atlantic and, being a family man, he took his family with him. Life was bleak in Balcombe's bungalow on the fringe of James Town. But then, in October 1815, the situation was transformed by the arrival of an unusual visitor. Napoleon Bonaparte, one-time master of Europe, now prisoner and exile, stepped ashore. The Balcombes, like all the islanders, were amazed. And even more so when Napoleon, taking a fancy to their bungalow (the Briars) moved in with them. Betsy, overcoming her surprise at sharing her home with an emperor, delighted in his company and the two became firm friends. Miss Betsy Balcombe made the most of her time with the world's most famous prisoner, keenly observing all around her, noting down conversations, recording moods. The result is a unique set of memoirs which records in astonishing detail an almost unbelievable story. That of how a precocious teenager and an emperor talked, argued, played, confided and teased their way through grim years of exile on the barren rock of St Helena.
This attractive, illustrated edition brings this remarkable story back to life.