"The American Empire Should Be Destroyed": Alexander Dugin and the Perils of Immanentized Eschatology (Paperback) 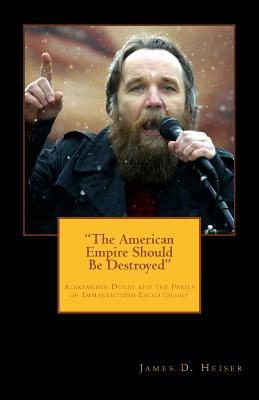 "The American Empire Should Be Destroyed": Alexander Dugin and the Perils of Immanentized Eschatology (Paperback)


Usually Ships in 1-5 Days
(This book cannot be returned.)
Over two decades have passed since the "Cold War" between the Soviet Union and the West ended. Many citizens of the former Soviet republics and Warsaw Pact nations have embraced the opportunities which come with expanded civil liberties and economic growth, but extremists exploit nostalgia for the days of empire. In the words of Vladimir Putin, "the collapse of the Soviet Union was a major geopolitical disaster of the century."
A new ideology-Eurasianism-is being advanced by those who dream of a new empire and revenge on the Western powers which brought about the collapse of the Soviet empire. Aleksandr Dugin, the father of Eurasianism, was recently described by Foreign Affairs as "Putin's Brain." For Dugin, the battle between Russia and the West is an epic struggle to fulfill ancient myths: a battle between the mystical forces of the mythical land of 'Arctogaia' and a decadent, materialistic America. "The American Empire should be destroyed," Dugin declares, "And at one point, it will be."
America needs to understand the nature of the Eurasianist ideology, and the fanaticism which wages war against the people of Ukraine today, and against the West tomorrow. "All too often, history is driven by the mad passions and ambitions of tyrants-and by warped visions of "progress" crafted in the shadows behind their thrones. James Heiser's brilliant new book drags one of today's most dangerous "gray eminences" into the light. His careful, intricate analysis reveals Aleksandr Dugin, whose twisted ideology shapes Vladimir Putin's brutal and aggressive effort to build a Eurasian empire centered on Russia. This is a must-read for anyone who wants to understand the perilous and irrational motivations of those who now rule in Moscow." -Patrick Larkin, co-author of Red Phoenix, The Enemy Within, and other best-selling thrillers, and author of The Tribune "James Heiser has written a profoundly fascinating book on an important and troubling man. Anyone concerned about the future of Russia-indeed international affairs in general-should read this book."-Peter Schweizer, President, Government Accountability Institute, William J. Casey Fellow at the Hoover Institution, author, Extortion, Victory, and Reagan's War "A penetrating analysis of the dangerous totalitarian dogma of the man who has become Putin's Rasputin. If you want to understand the new threat to Western civilization, you need to read this book."-Dr. Robert Zubrin, President, Mars Society, President, Pioneer Astronautics and Pioneer Energy, author, Merchants of Despair-Radical Environmentalists, Criminal Pseudo-Scientists, and the Fatal Cult of Antihumanism "As his views reported by Heiser make clear, Dugin believes these are literally the forces of the anti-Christ, and to combat them he calls for the mobilisation of the peoples of Eurasia led by Russia, and including the former Soviet republics, Germany, Central and Eastern Europe, Turkey and Iran, thus forging a 'natural' alliance with Islam while also ensuring Russian access to warm-water ports."
--Mervyn F. Bendle, "Putin's Rasputin," for Quadrant Online "Alexander Dugin is little known in Western countries. In this book, James Heiser convincingly advances the case that this Russian philosopher and occultist should be better known and helps us to get to know him.
"... 'The American Empire Should be Destroyed' provides a well-written history of the rise of Dugin and his influence on Russian politics. Likewise, it convincingly makes the case that the West needs to wake up to the threat which Dugin's philosophy poses when it is advocated, in part, by the Russian elite."
--Ed Dutton, Quarterly Review.
James D. Heiser is the Bishop of the Evangelical Lutheran Diocese of North America (ELDoNA) and Pastor of Salem Lutheran Church (Malone, Texas). He also serves as Dean of Missions for The Augustana Ministerium and as a member both of the Board of Directors and Steering Committee of The Mars Society. Heiser earned his B.A.-Political Science at George Washington University (Washington, D.C.) and his M.Div. and S.T.M. from Concordia Theological Seminary (Fort Wayne, Indiana). Heiser is the author of six books: one recounting the course of the Hermetic Reformation (Prisci Theologi and the Hermetic Reformation in the Fifteenth Century), a collection of essays concerning the Office of the Holy Ministry (Stewards of the Mysteries of God), two books of essays pertaining to space exploration and theology (A Shining City on a Higher Hill and Civilization and the New Frontier) and two books on the crises of the Modern age (A Time for Every Purpose Under Heaven and The One True God, the Two Estates and the Three Kingdoms). He is also the author of hundreds of published articles.