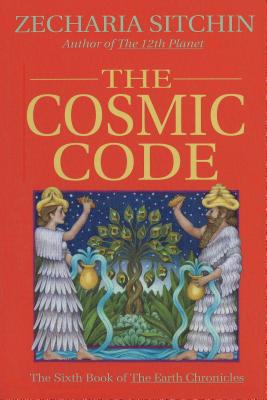 This is book number 6 in the Earth Chronicles series.

Reveals Zecharia Sitchin's groundbreaking research into the code left behind by the creators of humanity.

• Explains how the Anunnaki were not merely the mythical gods of the Sumerians, but rather the founders of human life on Earth.

• Using Biblical and ancient Sumerian sources, explains how to decode these messages our star ancestors left behind.

Daring to challenge our long-held beliefs about the origins of man, Zecharia Sitchin suggests that humans are not the children of God, but rather the children of the Anunnaki, an ancient race from the planet Nibiru. His revolutionary theories are supported by his intense scrutiny of not only ancient Sumerian texts but also stone structures all over the world. The similarities and astrological significance of these formations suggests that rather than looking for guidance from leaders here on Earth, humanity should instead look to the sky for answers.

The Earth Chronicles deal with the history and prehistory of Earth and humankind. Each book in the series is based upon information written on clay tablets by the ancient civilizations of the Near East. For the first time, the entire Earth Chronicles series is now available in a hardcover collector's edition.
Zecharia Sitchin (1920-2010), an eminent Orientalist and biblical scholar, was born in Russia and grew up in Palestine, where he acquired a profound knowledge of modern and ancient Hebrew, other Semitic and European languages, the Old Testament, and the history and archaeology of the Near East. A graduate of the University of London with a degree in economic history, he worked as a journalist and editor in Israel for many years prior to undertaking his life’s work--The Earth Chronicles.

One of the few scholars able to read the clay tablets and interpret ancient Sumerian and Akkadian, Sitchin based The Earth Chronicles series on the texts and pictorial evidence recorded by the ancient civilizations of the Near East. His books have been widely translated, reprinted in paperback editions, converted to Braille for the blind, and featured on radio and television programs.

"Sitchin's works are outstandingly different from all others that present this central theme. His linguistic skills in the languages of antiquity and his pursuit of the earliest available texts and artifacts make possible the wealth of photographs and line drawings appearing in his books from tablets, monuments, murals, pottery, and seals."
— Rosemary Decker, historian and researcher

"Sitchin is a zealous investigator into man's origins . . . a dazzling performance."
— Kirkus Reviews

"The book is not scence fiction, though it sounds like something from a tv show on ancient mysteries combined with the makings of a great sci-fi novel."
— Anita's Site, Mar 2008

“Well researched and persuasive . . . Sitchin brings to this book the logic and scholarship so often lacking. . . . He demonstrates the flaws in established theories and exposes a few ancient hoaxes.”
— Library Journal