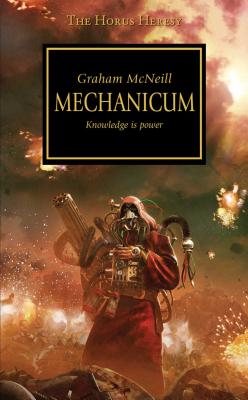 This is book number 9 in the The Horus Heresy series.

As the flames of treachery spread outwards through the Imperium, Horus mobilises those forces who are loyal to him, and plots to subvert or destroy those who stand against him. A battle is being fought for the heart and soul of all the Imperial forces – the Astartes, the Imperial Army, the Titan Legions and more. In this epic story, author Graham McNeill tells the story of the civil war on Mars, and the genesis of the Dark Mechanicum.
Graham McNeill has written many Horus Heresy novels, including The Crimson King, Vengeful Spirit and his New York Times bestsellers A Thousand Sons and the novella The Reflection Crack’d, which featured in The Primarchs anthology. Graham’s Ultramarines series, featuring Captain Uriel Ventris, is now six novels long, and has close links to his Iron Warriors stories, the novel Storm of Iron being a perennial favourite with Black Library fans. He has also written the Forges of Mars trilogy, featuring the Adeptus Mechanicus. For Warhammer, he has written the Warhammer Chronicles trilogy The Legend of Sigmar, the second volume of which won the 2010 David Gemmell Legend Award.