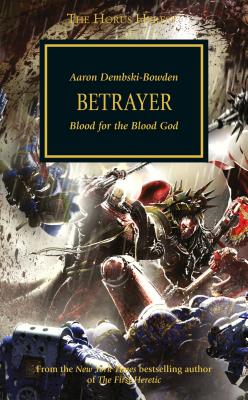 This is book number 24 in the Horus Heresy series.

Led by their primarchs, the Word Bearers and World Eaters Legions ravage the realm of Ultramar

The Shadow Crusade has begun. While the Ultramarines reel from Kor Phaeron’s surprise attack on Calth, Lorgar and the rest of the Word Bearers strike deep into Ultramar. Their unlikely allies, Angron and the World Eaters, continue to ravage each new system they come across – upon the garrison planet of Armatura, this relentless savagery may finally prove to be their undoing. Worlds will burn, Legions will clash and a primarch will fall.
Aaron Dembski-Bowden is a British author with his beginnings in the videogame and RPG industries. He’s written several novels for the Black Library, including the Night Lords series, the Space Marine Battles book Helsreach and the New York Times bestselling The First Heretic for the Horus Heresy. He lives and works in Northern Ireland with his wife Katie, hiding from the world in the middle of nowhere. His hobbies generally revolve around reading anything within reach, and helping people spell his surname.