Print Culture and the Formation of the Anarchist Movement in Spain, 1890-1915 (Paperback) 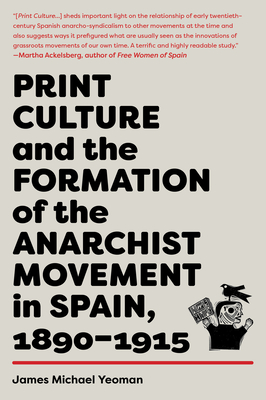 Print Culture and the Formation of the Anarchist Movement in Spain, 1890-1915 (Paperback)


Usually Ships in 1-5 Days
The origins of one the largest anarchist movements in history, told through its newspapers, pamphlets, books, and flyers.Print Culture and the Formation of the Anarchist Movement in Spain, 1890-1915 analyzes the formation of a mass anarchist movement in Spain spanning the turn of the twentieth century. This movement organized the largest body of anarchists in world history: the anarcho-syndicalist National Confederation of Labour (CNT). Anarchist cultural practices became ingrained in localities across the whole of Spain, laying foundations which maintained the movement's popular support until the end of the Spanish Civil War in 1939.This book shows that grassroots print culture was central to these developments: driving the development of ideology and strategy and providing an informal structure to a movement that shunned recognized leadership and bureaucracy. It offers a rich analysis of the cultural foundations of Spanish anarchism, while challenging claims that the movement was "exceptional" or "peculiar" in its formation, by situating it alongside other decentralized, bottom-up mobilizations across historical and contemporary contexts.
James Michael Yeoman is a researcher whose interests include the history of anarchism, Spanish and Latin American history and post-1945 radical social movements. He introduced and annotated Leopoldo Bonafulla's The July -Revolution: Barcelona 1909. Yeoman lives in Liverpool.