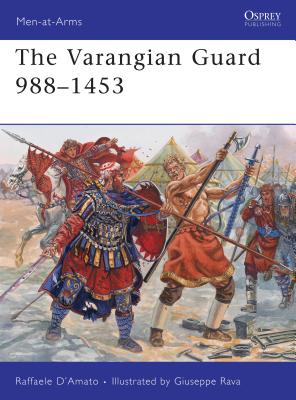 This is book number 459 in the Men-at-Arms series.

The Varangian Guards were Viking mercenaries who operated far beyond their native shores as an elite force within the Byzantine Armies. Descendants from a legendary line of warriors, the Varangian Guard was formed after a group of Viking mercenaries made a major contribution to the Byzantine Emperor Basil II's victory over rebel forces in 988 AD. These 5,000 men were then retained as Basil's personal guard and would provide loyal service to many successive occupants of the imperial throne.

Commonly referred to as 'foreigners' (Etaireia), they were nonetheless absorbed into a new Palatine regiment under command of an officer termed the Akolouthos, who was either a Norsemen or a Rus (Norsemen colonizers of Russia). The Varangians wore mixtures of their native clothing and armor together with a splendid formal Byzantine uniform. But most famously, they always wielded their own traditional battle-axes; this became a sign that the emperor was on the battlefield in person. This is an insightful look of one of the legendary guard units of the medieval world, complete with a dazzling array of artwork plates showing the Varangian Guard in an array of settings from court ceremonies to the battlefield.

Raffaele D'Amato, PhD, is the author of some 40 books and numerous articles on the military of Ancient Greece, the Roman Empire including Byzantium, and medieval Europe. He has taught at the University of Ferrara, and for two years as a visiting professor at Fatih University, Istanbul. He currently lives in England, working as an archaeological consultant and lawyer for Timeline Auctions Ltd of Harwich, and also as an external researcher for the Laboratory of the Danubian Provinces at the University of Ferrara.

Giuseppe Rava was born in Faenza in 1963, and took an interest in all things military from an early age. Entirely self-taught, Giuseppe has established himself as a leading military history artist, and is inspired by the works of the great military artists, such as Detaille, Meissonier, Röchling, Lady Butler, Ottenfeld and Angus McBride. He lives and works in Italy.
“The Varangian Guard 988-1453 shines a spotlight on legendary warriors who operated far beyond their native shores as an elite force within the Byzantine army ... Overall this 48-page book is a slender but insightful look at one of the legendary guard units of the medieval world.” —Toy Soldier & Model Figure