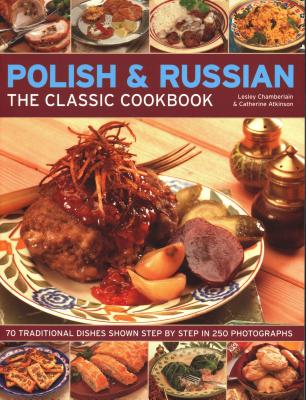 
Email or call for price
Russia, Poland and Ukraine are famous for their inventive use of simple, fresh ingredients. This book is a fascinating collection of 70 recipes that have been gathered from this region, which stretches from the Baltic Sea in the north to the Black Sea in the south. Many of the dishes have remained unchanged for centuries and are rooted in country traditions, mixing the tartness of pickles, sauerkraut and sourdough rye bread with wild mushrooms, onion, sausage and herring. Here are Eastern European soups and starters, meat and poultry, fish, vegetables, and grains, and desserts, cakes and bakes. Practical, easy-to-follow instructions with step-by-step photographs and a wonderful picture of each finished dish show you what you are aiming to achieve.
Lesley Chamberlain is a writer, linguist and traveller. Her acquaintance with Eastern Europe began with a year in Russia as a Reuter correspondent followed by independent travels. She has been a judge for the International Langhe Ceretto prize awarded to books on food and culture and is the author of a number of books. Catherine Atkinson earned a BSc (Hons) in Home Economics then worked in various hotels and restaurants including the Roux Brothers' famous patisseries. Her catering experience led to work in publishing and she became Deputy Cookery Editor on Woman's Weekly and later Me magazine. Catherine has written many cookbooks.