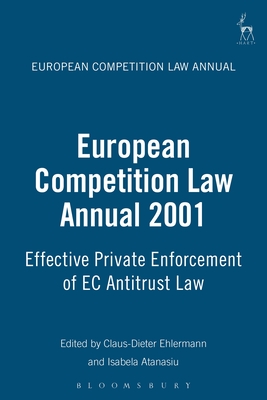 This is book number 6 in the European Competition Law Annual series.

The European Competition Law Annual 2001 is the sixth in a series of volumes following the annual workshops on EU Competition Law and Policy held at the Robert Schuman Centre of the European University in Florence. The volume reproduces the materials of the roundtable debate that took place at the sixth meeting of the Workshop (June 2001) which examined the conditions for an effective private enforcement of EC antitrust rules. The application of EC antitrust rules in the context of private litigation before national courts and arbitration tribunals is becoming a highly topical subject against the background of the ongoing debate about the decentralization of EC antitrust enforcement. The participants - a group of senior representatives of the Commission, national judges, arbitrators, renowned academics and international legal experts in the field of antitrust - discussed the following aspects: the availability and effectiveness of substantive remedies in the enforcement of EC antitrust rules at the EU level in general and in four major EU jurisdictions in particular (England, France, Italy and Germany); the procedural issues arising in the enforcement of EC antitrust rules by national courts in four EU jurisdictions (England, France, Italy and Germany) and at the EU level in general; and the problems arising in the application of Article 81(3) EC by arbitration tribunals.
Claus-Dieter Ehlermann is Senior Counsel with Wilmer Cutler Pickering Hale & Dorr LLP in Brussels, former Professor of EC Law at the European University Institute in Florence, and former Director General in both the Competition Directorate and Legal Service of the European Commission. He has also served as Member and Chairman of the Appellate Body of the World Trade Organization.
Isabela Atanasiu is Marie Curie Research Fellow at the Centre for Political and Constitutional Studies (CEPC) in Madrid; until December 2006 she was Research Fellow at the Robert Schuman Centre for Advanced Studies of the European University Institute in Florence.