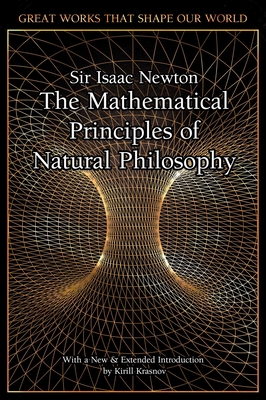 
Email or call for price
Mathematical Principles of Natural Philosophy, often known as the Principia, is one of the most important scientific works ever to have been written and has had a profound impact on modern science. Consisting of three separate books, the Principia states Newton’s laws of motion and Newton’s law of universal gravitation. Understanding and acceptance of these theories was not immediate, however by the end of the seventeenth century no one could deny that Newton had far exceeded all previous works and revolutionised scientific thinking.

FLAME TREE's Great Works That Shape Our World is a new series of definitive books drawing on ancient, medieval and modern writing. Offering a fund of essential knowledge, and spell-binding stories it satisfies every facet of human interest: scientific, philosophical, sociological, romantic, dramatic and mysterious. From the ancient wisdom of the Mahābhārata to the curious power of Don Quixote, Boccaccio's Decameron and Melville's classic Moby Dick, from the scientific wonders of Isaac Newton and Albert Einstein to the great thinkers of Western and Asian philosophy.

Created to entertain, inform and enrich, the new series brings infinite variety to refresh the mind, presented in beautiful editions for the modern market. Each book features a new, accessible introduction, specially written for these editions, placing the book in context both as part of the new series, and highlighting its special contribution to the advancement of human understanding; they examine the significance of each work, their impact at time of publication, and their influence today.
Sir Isaac Newton (1642–1727) was an English physicist and mathematician who was a leading figure in the scientific revolution. His work throughout the seventeenth century provided the basis for modern science, including his three laws of motion and the law of universal gravitation. Newton’s career was prolific. He was president of the Royal Society and in 1705 he was knighted, becoming the first ever scientist to receive the honour.

Kirill Krasnov is a Professor of Mathematical Physics at the University of Nottingham. He received a BSc in Physics from Kiev T. Schevchenko University in 1994 and a PhD in Physics from Pennsylvania State University in 1999. He has held Postdoctoral positions at the University of California, Santa Barbara and Max Planck Institute for Gravitational Physics, Potsdam. He has been the recipient of the prestigious EPSRC Advanced Fellowship and the ERC Consolidator Grant. Krasnov is most known for his work on black hole entropy within the loop approach to quantum gravity, work on spin foam models of quantum gravity, as well as work on the renormalised volume of hyperbolic 3-manifolds.