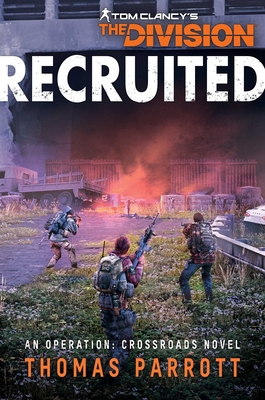 
Usually Ships in 1-5 Days
A newly recruited agent is the Strategic Homeland Division’s best hope to prevent a nefarious plot from ripping the agency apart, in this brand new post-apocalyptic thriller from Tom Clancy’s The Division®

Maira Kanhai has had enough: since the Green Poison epidemic hit DC, her Cybersecurity degree is worthless, she can’t rejoin the US Navy, and her early efforts to secure Maryland led to a costly mistake: the death of her brother. Every day new factions emerge, trying to burn her city to the ground – until the Division emerges, inspiring hope. When a grenade kills one of their agents, Maira suddenly has a chance to make a real difference as a raw new Division recruit … if she can pass the tests, and overcome the enemies plotting to permanently eliminate the Division once and for all.
THOMAS PARROTT grew up reading science fiction and fantasy. This was compounded by the discovery of video games and tabletop roleplaying, leading to a life of dealing with the mundane while dreaming of dragons. He has written Isha’s Lament, The Test of Faith, and Loyal to the End, all for the Warhammer 40,000 setting, as well as short fiction for Arkham Horror and KeyForge anthologies.
“Parrott’s work on this novel absolutely hooked me in. Sure, there’s a certain amount of familiarity in setting that drove some of it, but the detail he went into when describing scenes I could picture in my head so clearly that I struggled to put it down. I found myself hanging onto every word.”
— NGN

"Fans of the game will likely be thrilled to see the continuation of that story."
— Game Industry News

"Recruited is a fast-paced, action-packed and utterly captivating thriller that perfectly matches the atmosphere generated by its source material – a flawless adaptation of The Division."
— Sci-Fi and Fantasy Reviewer

"Peppered between the action and tension there are moments where we see the weakness and ‘human’ side of the elite agents. Most definitely a must read for fans of The Division games but also could easily be a stepping stone into the universe and games or to someone who just enjoys a good post-apocalyptic read."
— What You Tolkien About